An Evening With Wild Man Fischer

"The material for this album was recorded live in the street (with Larry's knowledge and consent) in front of The Whisky A Go Go and The Hamburger Hamlet on Sunset Strip, by Dick Kunc on a Uher portable stereo tape recorder. The percussion effects were added later in Studio 2 at Sunset Sound by Art Tripp, engineered by Jerry Hansen. Larry's unaccompanied songs were recorded at Sunset and in the basement of The Log Cabin. The monologues were recorded at Sunset. The Taster and Circle are accompanied by multiple over-dub tracks which I manufactured. Merry-Go-Round and Serrano Beach are accompanied by The Bizarre Percussion Ensemble. The Madness & Ecstasy of the second half of Side One was a spontaneous recitation (he was making it all up in the studio, believe it or not) by Mr. Kim Fowley and Mr. Rodney Bingenheimer, assisted in spots by the GTO's (Girls Together Outrageously). The girl's voice at the end of Side One belongs to Miss Johna, who was, at one time, Larry's girl friend[sic]. The percussion was added later on another session.

Please listen to this album several times before you decide whether or not you like it or what Wild Man Fischer is all about. He has something to say to you, even though you might not want to hear it."

[Editorial note: The inner spread of this album's gatefold sleeve is a Cal Schenkel assemblage of images, credits, tracklist and the above comment by FZ. Within this layout is a hand-drawn 'celebrity' chart by Fischer, with the added typeset comment:]
'Wild Man asked us to include this chart'
[An image of it is included here and, for the purposes of clarity, a transcription of it is shown]. 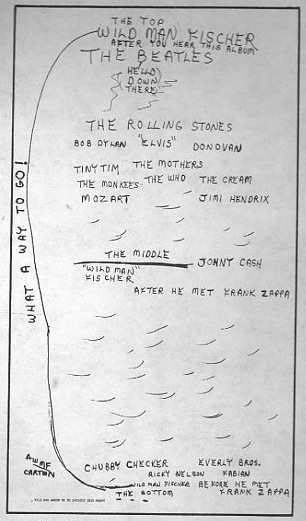 [† these 2 points are connected by a sidebar with the words:]
"What a way to go!"
[It is signed:] AWMF Cartoon

(Back cover:) Wild Man Fischer is a real person who lives in Hollywood, California. He used to be very shy. He didn't have any friends. One day he decided to be more aggressive. He would write his own songs and sing to people and tell them he wasn't shy anymore. When he did this, everyone thought he was crazy. His mother had him committed to a mental institution twice.