The World’s Greatest Sinner (The Film) 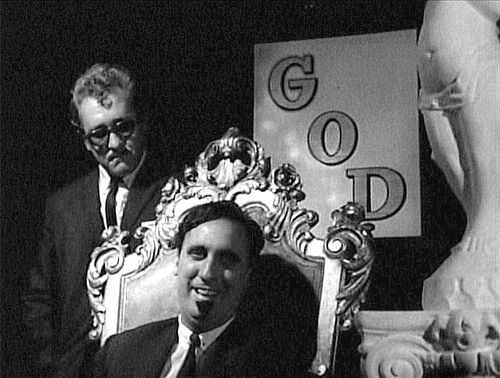 Scene from the film.

The World's Greatest Sinner is a 1962 film, directed by and starring Tim Carey. It was produced by Frenzy Productions.

The plot revolves around a frustrated atheist, who rises from an insurance salesman to a powerful figure. Yet in his increasing egomania he faces consequences from God.

Martin Scorsese and Will Oldham are famous fans of this film. Johnny Depp recommended this film to Ian McShane.

Zappa was invited on The Steve Allen Show, where he mentioned that he wrote music for this film. Years later Zappa obtained a copy of the film through Gerald Fialka, as a birthday present.

Zappa about the film

Interviewer: You also did the soundtrack for a movie called The World's Greatest Sinner at that Cucamonga Studio. What kind of movie was that?

Frank Zappa: "It was a feature film produced, directed by and starring Timothy Carey ... I did the score and the rock & roll theme song for it. The premise of the film was: a man believes he's God, doubts himself, breaks into a church, steals the communion bread, sticks a pin in it to find out whether or not it will in fact bleed, it bleeds, and he realizes he's not God. How's that for a great plot?"