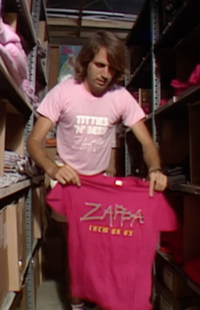 Gerry Fialka worked for Frank Zappa from 1983 to 1993. He answered the phone for Barking Pumpkin Records' hotline and ran Barfko-Swill, Zappa's mail-order business. He appears in the 1987 VHS release of Baby Snakes and is credited as "Cool guy who wraps stuff so it doesn't break." (This clip also appears in the 2020 documentary.) He also worked as an archivist and production assistant.

Outside of his work with Zappa, he is an experimental filmmaker, lecturer, interviewer, curator and writer.

Once as a birthday present, he gave Zappa a videotape of The World's Greatest Sinner.