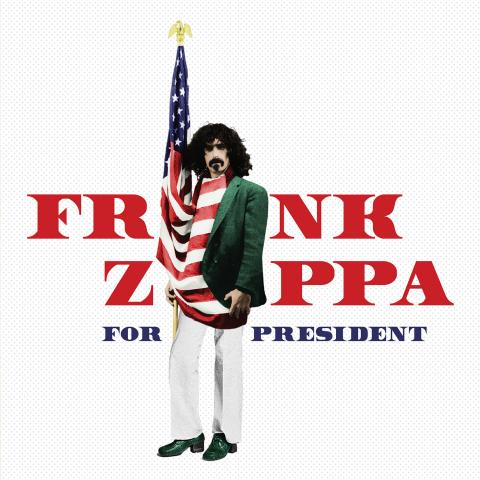 As early as 1971, interviewed during Roelof Kiers' Frank Zappa (1971 Documentary) Zappa considered running for President, but felt having to stay in The White House for four years was something he couldn't bring himself too.

In 1991 Frank Zappa considered running for President of the U.S. in 1992 as an independent candidate, but his illness prevented him from pursuing that further. Zappa wanted Ross Perot as his vice-president, and Alan Dershowitz as his attorney general. In 1992 and 1996 Perot ran for president as an independent himself, but lost to Bill Clinton.[1]

In a 15 April 1991 radio interview with Charles Amirkhanian, Ode To Gravity - Frank Zappa: World Affairs Commentator, Zappa discussed the possibility of running for U.S. President and having John Cage and Noam Chomsky as cabinet members: "The only thing I'm worried about is that since John Cage is macro-biotic, he won't be available for the Cabinet now." He also said he consulted Ray Struthers and Bob Beckal, who formerly ran Gary Hart's presidential campaign. Zappa explained that the prime reason he wanted to be independent was that all politicians he kind of appreciated on certain issues, usually said or did other things which he couldn't stand behind. Even the one U.S. President he kind of respected: Harry S. Truman.

In the same interview Zappa was also asked how much he would cut military spending as a president? Zappa: "I would cut it a lot. Because one of the things that is grossly wasted in the expenditure … the expenditures now is – and you can see what's happening with these base clothings that everbody is worried about, ah – … the size of the military it's too large. You don't want to have an enormous military unless you'r expecting to go out and conquer other people's countries. The idea of national defense should be structured in a way that it defends this country rather than being used as a mechanism to enforce bad foreign policy." When asked about improving the educational system and poverties in the inner cities he said: " Well, first things I would do about the educational system is, put a stop to the meddeling, that the … uhm … fundamentalist groups have engaged in regarding the text books, which are used in US schools. I mean, you can't blame a student for not wanting to study out of a book that contains little or no useful information. (...) I know it sounds really corny and you heard it a million times before, but this country isn't gonna have a future unless there is some way to educate the people who live here. One of the problems that any educator is gonna face in this society is, it's a post-literate society. And the easiest way to get information into the face of the students is unfortunately not through a book, but is more likely too … the information is more likely to stick if it's delivered through … ah … some other visual medium, whether it's video tape or some sort of produced lecture material, that graphically demonstrates what the subject is about, whether that's done on an interactive CD or on some kind of a computer situation, where a person can access the database and interact with it and comprehend it at his own speed. Those are things that need to be installed in US education. And as far as poverty goes, I'm amazed when faced with the amount of people who are still homeless, still starving, still messed up in the society, that this president hasn't said to the Congress, "Do something about it." I mean, there is just no priority there. And, nothing is gonna happen, until somebody, who's running the show, says, "Make it happen." And … he … George certainly is not sayin' "Make it happen," his biggest worry is … capital gains tax."

Female caller: Could you say something about what the content of the education like you think it should be?


FZ:: "I think that it should be as varied as possible, I think there are all different kinds of things that need to be known about all different kinds of topics. Let me give an example of the type of interference which has already occured in the world of the text books. And … as you might know, the publishing business for school text books is a multi-Billion Dollar business. And the way the text books are provided to each … erm … state, is … they looked toward (?) the Texas school system, which is one of the biggest purchasers of books, and the books are kind of put on trial in the Texas school system or in hearings before the've gone into the school system. And there is a husband-and-wife-team, that operates out of Texas, they are the Gabblers, Mr. and Mrs. Gabbler, and routinely they bring to these hearings complaints about the contents of the books. In the case of science books it would be, that the book doesn't contain enough Creationism, and in the case of a Geography book, recently, they objected to the book, because, in the chapter that dealt with Siberia, there was a sentence that said, 'Siberia is just like the US Wild West, in the Olden Days', and they complained to the board that this made Communism appear in a favorable light. And, believe it or not, the publisher changed the book. When you have little, small-minded people like that, with that kind of power to … modify the contents of text books, I think that … ah … the nation suffers, because it doesn't … the evil doesn't occur just in Texas. The books, that passed muster in Texas wind up being used in other states. Here is another example: In the early days of the Reagan administration there were a number of court cases, where parents … of ah … fundamentalist parents had complained to the school system that science books didn't contain enough Creationism. And … one of these cases occured in California. And the result was, that the state ordered a whole new badge of science text books and told the publishers to put Creationism into the science text books. So a few years later, when the books were finally delivered to the California school system, there was so little science in the book, that the books was rejected. Now, two things happened then. That means, that eventually they're gonna have to get another book and the California tax payers already paid for one load of books. It also means that those books which contained no science didn't go into a shredder, they went to somebody else's school system."

Female caller:: Um … could you say something about the Geography as it's bein' taught now and offer some thoughts on your foreign policy? Now, take the answer on the air, thanks a lot.

FZ:: "Ok, Aw, first Geography, as it's bein' taught, well, you have to wonder, ah, when some of the polls have shown that, ah … hello, can you still hear me?"

CA:: Hold the line, caller will be with you in just a second.

FZ:: "Yeah … that so many people in this country can't even identify the US on a map. So … you can just extrapolate from that what happens when a person who doesn't understand Geography, let alone the culture of the people who live in different countries, look at the Evening News and see these events happening in far away places."

In Frank Zappa. Interview in Playboy, 2 May 1993 Zappa explained: "I would have started by dismantling the government. At least I would have presented the idea to the voters.In the Beltway and places that have large federal payrolls, the idea wouldn't be too popular, but in other places people would think it's great. One strong selling point is that you could do away with federal income taxes, or at least reduce them to a point that people would have something left at the end of the week. In the end, I think people, in their enlightened self-interest, would consider voting for that."

Interviewer: If you dismantled the government, you'd put yourself out of a job.

Zappa: "No, because most reasonable people would agree that we need roads, for instance, and water you can drink and breathable air. Most people realize that there has to be some coordinated infrastructure and a national offense that is commensurate with whatever threat you feel from other countries."

Zappa: "I mean – well, what we have now is national offense. We should have national defense."

Interviewer: You've said that you're not a peacenik.

Zappa: "Human nature and human stupidity often breed violence. When violence escalates to an international confrontation, you should be able to protect yourself. On the other hand, to plan for it – like we did throughout the Cold War – based on badly handled intelligence estimates of the threat to our national security is just stupid. Most intelligence estimates indicated that the Soviet couldn't do shit to us, but they were ignored order to maintain the level of employment and financial activity in the defense industry."

Interviewer: Do you think that our recent election was irrelevant?

Zappa: "Yes, because America has to be completely restructured. We have to question every institution in terms of efficiency. I'm serious about abandoning the federal system."

'Interviewer: Is there any way that it's likely to happen?

Zappa: "Not this week, but I wish people would at least consider it. They think, There it is, we're stuck with it, it will go on forever. It doesn't have to. The Soviet Union didn't go on forever. If you want reform, the people who've been doing a bad job have to get fired. They have to go back to the used-car lot from where they came."

Interviewer: Yet you've always pushed people to vote. Why bother?

Zappa: "Even if you don't like the candidates, there are issues that affect your life. Bond issues affect your pocketbook. That's the only real reason for voting. As far as the rest of government is concerned, forget it. The amount of overstaffing, overlapping, wasted energy and pompous pseudograndeur is science fiction. All of it is supported by this universe of political talk shows. CNN is one of the worst offenders on the planet. It maintains the fiction of the theoretical value of the thoughts and words of these inferior human specimens who manage to become Beltway insiders."