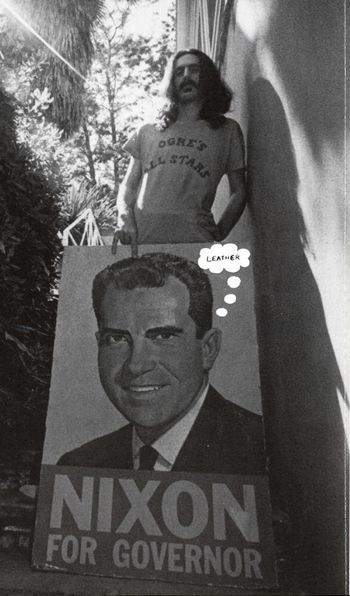 Richard Nixon (1913-1994) was President of the United States from 1969 to 1974. He was criticized for his role in the Vietnam War and forced to resign because he participated in a cover-up of a burglary in the headquarters of the Democratic Party in the Watergate Hotel in Washington in 1972. Nixon was the first American President who resigned from office.

A Frank Zappa/Mother of Invention T-shirt from the early 1970s featured a quote from Richard Nixon: "There is no undertaking more challenging, more rewarding than the responsibility of being a Mother.", with a quote from Zappa written underneath it: "Thanks a lot, Dick!" One of Zappa's interviewers is wearing this shirt in a interview for Finnish television from 1974 (http://www.youtube.com/watch?v=rYu3UsNIXMM&feature=related)

Mentioned on Roxy & Elsewhere in the song Son Of Orange County after the line "the words from your lips", where Zappa adds "I'm not a crook", the infamous defense of Nixon during the Watergate affair. Nixon was born in Orange County. During the intro to Be-Bop Tango Zappa talks about "the old days" and concludes: "Well those days are probably gone for ever, unless Nixon is gonna bring them back a little bit later."

In Titties 'n Beer The Devil mentions: "You should have seen some of the souls I've had. Well, there was Milhouse Nixon and Agnew too. And both of those suckers were worse than you!"

Nixon is also the main target in the songs Dickie's Such An Asshole and That Arrogant Dick Nixon.

Quotes by Zappa about Richard Nixon

"I do think that Richard Nixon's a criminal, though. He is not a crook. He is a criminal." (FZ in Frank Zappa's Got Brand New Shoes)

"Nixon was not a good guy. He was a creative guy. He was a very neurotic guy. A paranoid guy. And I think he did an awful lot of damage to the imagination or the way in which the American public imagines the government should be. They would like to be able to have some respect and some belief in the presidency and Nixon blew it (...) And then later on, comes Nixon doing these pitiful things that had some really grotesque implications for the future of democracy in this country. Setting up a Secret Police to spy on U.S. citizens. I mean, that's the core of Watergate. It's not that he broke in to find out what the Democrats were doing at election time. He sets up COINTELPRO to spy on U.S. citizens! With a slush fund. And it was relying on this network of very naughty people in the background who just thought it was the best thing that they could do. So you can see why I would be little bit disturbed that recently they had this inauguration for the Richard Nixon US Library in San Clemente, and I looked at it and said: "It's Richard Nixon. The final rants!" After all the bad things that this guy did , and what he has to come to represent in terms of the lowests ebb of U.S. politics- until Reagan of course, and maybe Bush will be able to exceed it in a few weeks - he gets this fantastic cleaning job: he's got the boy scouts and girl scouts parading in front of him, he's got the band from Disneyland playing for him and he's got this array of former Presidents giving him the big whoo-ha. It was pathetic. It was just such staged nonsense." (FZ in The Lost Interview, part 3 of 7, 1990)