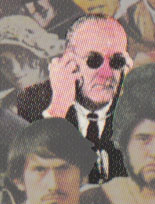 LBJ's first image on the cover of "We're Only In It For The Money".

LBJ's second image on the cover of "We're Only In It For The Money".

Lyndon B. Johnson (1908-1973) was President of the US from 1963 to 1968. During his presidency he was heavily criticized for his policy regarding the Vietnam War.

Zappa mocks Johnson's idea of a "Great Society" in Hungry Freaks Daddy and Trouble Every Day. His voice is imitated at the beginning of Plastic People. His face can also be seen twice on the cover of We're Only In It For The Money.[1]

He is also referenced in German Lunch.

In The Lost Interview Zappa said the following about Johnson: "I didn't like Lyndon Johnson. But I've come to appreciate him slightly more in retrospect now that we can learn more things about what happened during his administration. But during the time that he was the President I really felt that he blew it. And he was just another one of those Texas crooks."