The Plaster Casters Of Chicago 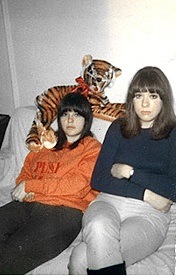 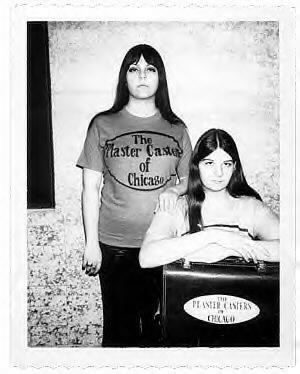 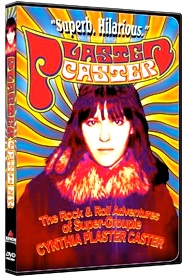 As the 'Swinging Sixties' came to a close on both sides of the Atlantic the constantly evolving personalities in the 'Freak Scene' of Los Angeles provided Zappa with a wealth of inspiration for his controversial projects. As his work edged toward the 70's his particular foresight and comment on the Human Condition coalesced the downright bizarre with the social norm of California, elevating the most unlikely characters in the world of music into indelible public consciousness.

None more so than a pair of groupies he had met in Chicago whom he introduced to the LA music scene in furtherance of their 'groupie-art'. The Plaster Casters Of Chicago, as this duo came to be known, effected their access to meeting rock stars by taking plaster casts of their erect manhood for souvenirs. The key operator was Cynthia Plaster-Caster (real name Cynthia Albritton), aided by her musician-stimulating accomplice- a role initially occupied by her high-school art student friend known as 'Pest', then by Dianne Plaster-Caster who retired from Casterdom and was replaced by a succession of assistants.

In January 1969 Rolling Stone ran a 'groupie issue', with photos by Baron Wolman featuring The Plaster Casters Of Chicago, described as "two teen-age art students who recently studied the art of body casting and took their newly learned technique to new highs…or lows, as the case may be. Cynthia Plaster, as she is now known, and her 'plater', Dianne, are able to immortalize musicians in a unique and refreshing, if somewhat controversial, manner".

Playboy: "...There were other characters – such as Cynthia Plaster-Caster. Tell us about her..."
Zappa: "Eric Clapton introduced me to the Plaster-Casters. They had all these statues of the dicks of people like Jimi Hendrix. One of them mixed the plaster stuff to make a mold, and the other gave the guy a blow job. She took her mouth off the guy's dick, and then the other one slammed the mold onto it. We declined to be enshrined, so to speak".

Cynthia, still very much active today, says of these events in her Web blog and an online interview with Christine O'Brien:

O'Brien: "How did you meet Frank Zappa? I heard that Eric Clapton told him about you?"


Cynthia: "Frank Zappa? Yeah, I tried to talk Eric into posing with me. Eric had said to stop by his hotel room the following day. So, we went over to his hotel room, and no one was really interested in posing for me. Eric had a friend who knew Frank Zappa, so he was there, and he wanted to know what we were doing. He wanted to interview us for a pop and culture piece he was doing for Life magazine. He told us that he was into what we were doing, and The Plaster Casters of Chicago were born!
O'Brien: "When you were living in Los Angeles your apartment was burglarized and your ‘precious babies’ were almost stolen. This led you to contact Frank Zappa's business manager, Herb Cohen, and he suggested you keep the casts in a vault he had in his house for safekeeping. But when you were moving back to Chicago he wouldn't give them back to you? Is that correct?"
Cynthia: "That's right, ...He [Herb Cohen], at the time, said, “Don't worry, we'll exhibit them someday,” but I never heard from him. I waited a long time, and it came the day I was moving back to Chicago. I asked him for them back and he wouldn't give them back.
O'Brien: So you had to go to court?

Cynthia: "Yeah, I got back the bronzes, not the originals. Three bronzes were missing. I got back all but three..."

Mitchell: "Did you ever cast Zappa?"
Cynthia: "I never cast Frank Zappa because in real life he was a normal family man with the reputations of his wife and children to consider. Casting was never his thing, but he sure was qualified to be in my collection!"

Zappa's vision of her publicly exhibiting her works as an art-form did finally come to fruition after his death. The debut exhibition of her collection, now including casts of breasts and titled “The Life Casts of Cynthia Plaster Caster”, happened at New York State's Thread Waxing Space visual arts center in June 2000.

She has had a documentary film made of her exploits, 'Plaster Caster - The Rock & Roll Adventures Of A Super-Groupie', in collaboration commentator/director Jessica Villines and its producers; editor Brian Johnson and director of photography Jeff Economy. It was premiered at the Langley Theatre on Sunset Boulevard in 2001 and includes an interview with fellow groupie Pamela Des Barres, whom she met in Chicago after a Zappa 'phone introduction and subsequently befriended in L.A., and footage of Miss Mercy of the GTO's.

The band 'KISS' did a tribute track 'Plaster Caster', written by 'tongue virtuoso' Jeff Simmons, on their 1977 album 'Love Gun'- although the band were never 'immortalized' by her. It too features in the film, now available on DVD.

For Conceptual Continuity on groupies any Caster fans should check out Track 16 of Permanent Damage by the GTO's.