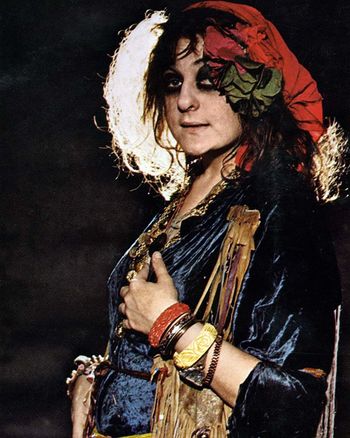 She left home at age 16 and went to the freak scene of Haight-Ashbury. Despite their strong disapproval, she went ahead and filed for her own emancipation, becoming a ward of the court within a couple of weeks. Miss Mercy went to live with Miss Cynderella and Christine Frka in the Haight-Ashbury district of San Francisco, California. Some of their earliest neighbors included members of the Grateful Dead, Janis Joplin, and even a young Charles Manson.

"Conversation ceased, and we were staring at a plump version of Theda Bara wrapped in layers and layers of torn rags, an exotic bag girl with black raccoon eye makeup that dusted down both cheeks and looked like she had twisted two hunks of coal round and round on her eyelids. Her lipstick was a red seeping slash and both earlobes had been split down the middle by the weight of too many dangerous earrings dangling too far down. She was carrying a beat-up satchel that had once been an alligator, its seams bursting open, shedding gaudy garments with each step of her black patent-leather pumps. It looked as if she had come to stay. It was frightening."

Eventually, Miss Mercy and Pamela des Barres heard from peers that Los Angeles was the mecca for meeting entertainers and especially rock & roll musicians. In addition, Miss Pamela wanted to pursue her acting career in Hollywood, and in early 1969, they moved south, immersing themselves into the local scene. Then, one of Miss Pamela's childhood friends, Captain Beefheart, took the girls to a large castle-like compound in Laurel Canyon, where she became part of The Laurel Canyon Dance Company with Vito Paulekas and Carl Franzoni. There she became a member of the GTO's. She also performed vocals on An Evening with Wild Man Fischer.

After the group's breakup she had an affair with blues guitarist Shuggie Otis, son of Johnny Otis.[1] They married and had a son named Lucky. Later the couple divorced and Miss Mercy battled with drug addictions for te next 15 to 20 years. She was remarried from 1991 until her divorce in 2000. Then she decided to quit all her self destructive habits and to this day works in a thrift shore in Hollywood. She contributed a chapter to Pamela des Barres' autobiographical book "I’m With The Band".

On 27 July 2020 it was announced by Pamela des Barres that Miss Mercy had passed away at age 71.