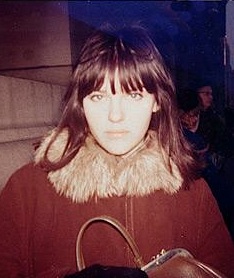 Cynthia Albritton, photographed in 1965, while still an art student.

Cynthia Albritton (Chicago, Illinois, May 24, 1947 - April 21, 2022) AKA Cynthia Plaster-Caster of The Plaster Casters Of Chicago, AKA Cynthia P. Caster was a groupie and sculptor. She gained notoriety for making plaster casts of penises of rock artists. Apart from band members, she also made casts of tour managers, music producers and film makers.

Albritton was born in 1947. She grew up an only child in a dysfunctional working-class family with an alcoholic father. Self-confessed to being shy and awkward, she attended the Art College campus at South Shore High School in Chicago, Illinois, where she and her best friend 'Pest' became turned-on and tuned-in to The Beatles and the invasion of the British music scene of the 'Swinging Sixties'.

A work assignment from a college tutor, requiring them to plaster cast "something solid that could retain its shape", was to lead Albritton to approach musicians who were in town that weekend, on Dick Clark's 'Caravan Of Stars', and into an unsuccessful attempt at casting the erect penis of Paul Revere (from the band Paul Revere and the Raiders).

Albritton and her best friend Pest gained notability in the local music scene of Chicago of the late 1960s as Cynthia Plaster-Caster of The Plaster Casters Of Chicago. Over the years they made casts of famous rock artists like Jimi Hendrix, Noel Redding, Peter Tork [1] (The Monkees) Eric Burdon, Wayne Kramer [2] & Dennis Thompson (from MC5), Ricky Fataar (The Beach Boys, The Rutles), Jello Biafra[3], and many more...

In 1994 she legally retrieved most of her casts, formerly in the possession of Zappa's former manager Herb Cohen.[4] From 2000 on, Albritton also made casts of women's breasts. Her most well known breast casts were rock musician Peaches, Karen O. (The Yeah Yeah Yeahs), Suzi Gardner (L7) and Laetitia Sadier (Stereolab). [5][6] Cyntha Plaster-Caster's work has often been exhibited.

In 2001 Albritton was subject of a documentary film, Plaster Caster. She also inspired some of the lyrics in songs like Plaster Caster (Kiss), Five Short Minutes (Jim Croce) and Nanny Nanny Boo Boo (Le Tigre). [7] 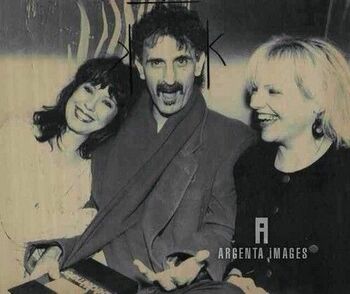 In his autobiography, The Real Frank Zappa Book, Zappa devoted a section to his first encounter with Cynthia Plaster-Caster in the 1960s, being in the presence of Eric Clapton. While both he and Clapton denied a request to have a cast made of their penises, Zappa did help her move from Chicago to Los Angeles. Her voice can be heard on the track Miss Pamela's First Conversation With The Plaster Casters Of Chicago, from the album Permanent Damage (1971) by the GTO's, on which she is interviewed by Pamela des Barres. [8]

In 1971 Cynthia's apartment was burglarized. Zappa then gave her plaster-caster collection to manager Herb Cohen for safe-keeping and potential future exhibitions. Such an exhibition never came about at the time, by a lack of new rock musicians who wanted to have their genitals "plaster-casted". When Zappa sued Cohen in 1977 for contract infringement, it took Cynthia several years to legally get her collection back. Only in 1994 she was able to retrieve most of it, save for three casts. [9] [10]

In 2015 Cynthia exhibited her plaster caster collection at the annual Zappanale festival in Germany, under the title Penis Dimension. [11]

Although Zappa declined a request to have his penis sculpted, Cynthia did possess a plaster caster of Aynsley Dunbar ([12]) (sculpted on 30 September 1970, when he was still a member of the band Journey) and John Smothers (29 November 1980). She described Dunbar as "the most difficult" contributor: "He wouldn't dip into the canister until he thought he was big and beefy enough. I was wasting a lot of alginate waiting for him."[13]