Ruth Underwood (Born Ruth Komanoff 23rd May 1946) is a classically trained percussionist studying at Ithaca College under Warren Benson and at Juilliard. 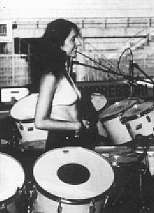 First encountered The Mothers at their Garrick Theater shows:

"Oh, I was probably one of those rather stiff people from the suburbs - I think some of us did understand, and we kept coming back for more, and more, and more. I remember being very upset when they finally finished their stint at the Garrick Theatre and went back to LA. I felt as if the real heart had gone out of New York City, and I had to get back on with my Conservatory music training life, which seemed very dull after this."

She married Ian Underwood in 1970.

Provided percussion and/or synthesizer for

Having divorced she returned to using her own name and seemingly retired from the music business to raise her family.

"A couple of years ago, when I heard that Frank was ill, I called him up. For 14 years we had no contact at all. He invited me to the house and we enjoyed some really nice visits with each other. Last June (1993) he called and asked if he could sample some of my stuff. I was shocked because I hadn't touched a pair of mallets since March of '77. I ended up practicing for 14 hours, which was all the time I could get together in the context of my life now. I spent four days at Frank's house sampling. This was really a miracle for me - that I could be reunited with him and still have something to offer."

In 2003 she was working as a percussion teacher at Colfax High School, Valley Village, CA.

Ruth Underwood is interviewed in BBC Television Tribute (1993) and the documentary The Drummers Of Frank Zappa (2010).

Ruth Underwood is also mentioned and thanked in the liner notes of The MOFO Project/Object (2006) album. [1] She wrote the liner notes in the sleeve of the album Roxy By Proxy (2014) and Zappa In New York 40th Anniversary Deluxe Edition in 2018.