The Dub Room Special was a film produced for direct-to-video release in October, 1982. The video combines footage from a performance at the KCET studios in Los Angeles on August 27, 1974, a concert performed at The Palladium, NYC on October 31, 1981, some clay animation by Bruce Bickford, and several interviews.

The video was only available through mail-order, and thus went unseen by many of Zappa's fans until it was made widely available on DVD on October 17, 2005. The DVD version was trimmed slightly by Zappa to fit the space limitations of early laserdiscs. The 1974 footage was originally conceived as a TV special. In 2007 a soundtrack with the same name was released. 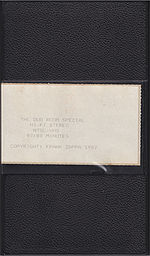