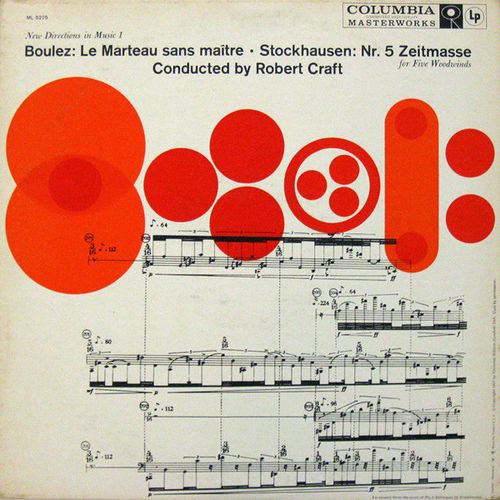 The cover of the 1958 album Zappa owned and loved.

Le Marteau Sans Maître (The Master Without A Hammer) is a 1955 composition by French composer Pierre Boulez.

In 1958 Boulez conducted a recording of this piece, which was released by Columbia Masterworks, adding a recording of Karlheinz Stockhausen's Zeitmasse, conducted by Robert Craft, on the other side.

In "My Favorite Records", an FZ penned article in Hit Parader (1967) Zappa names it one of his favorite albums: "Also, Pierre Boulez conducts his own composition: 'Le Marteau Sans Maître'. I don't know what label that's on, but it's the one with Boulez conducting. The one by Robert Craft has too many mistakes."

On November 10, 1968 Zappa was DJ during a radio show on KSAN, San Francisco, and played a recording of Le Marteau Sans Maître on the air.

"I bought my first Boulez album when I was in the twelfth grade: a Columbia recording of Le Marteau Sans Maître' (The Hammer Without a Master) conducted by Robert Craft, with 'Zeitmasse' (Time-mass) by Stockhausen on the other side." — Frank Zappa, The Real Frank Zappa Book, 1989.