Not Funny But Frankly 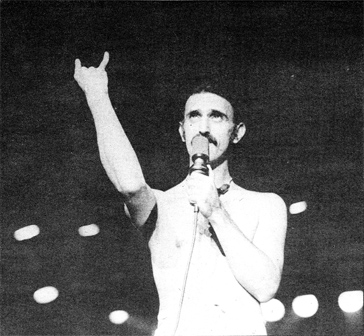 What can a vegetable like me say to a human but …?
Pic: Pennie Smith

FRANK ZAPPA can be an erratic and frustrating – if not frustrated – old goat. He balances moments of cunning compositional splendour with a penchant for excessive debasement. It's almost as if he's afraid to have his music taken seriously. Or perhaps he's all too aware of the limited audience that exists for the modem day composer and is therefore forced – and by implication damned – to cooking up scuzzy little routines in order to sell records and concert tickets and thus gain means to continue his further education.

Observers of recent Zappa gigs will have noted that his normally patronising attitude to his audience has developed into a fine art. There can't be many entertainers around who can get people to pay good money to have their tastes, lifestyle and social habits insulted for two hours at a stretch.

Some of it is deserved, and some of it also is good, biting comedy, but lately the comic quota has begun to eclipse other aspects of Zappa's work, becoming repetitive and tired enough to verge on selfparody. Which is one of the central bugbears of "Live In New York". Recorded in the winter of '76 with Eddie Jobson,Ray White, Pat O'Heam, Terry Bozzio (now well entrenched in George Duke's old role of Zappa's comic foil), Ruth Underwood (since departed because, says Zappa, she wouldn't dance), extra percussion and a brass section, but delayed by contractual wrangles, it features roughly one instrumental jam, one side of orchestrated ensemble gymnastics, and two sides of the aforementioned routines.

I'll tackle the funny stuff first, since, as Zappa seems acutely aware, it presently constitutes his most bankable asset. Those Dinah Moes are still hummin', so to speak.

Zappa's sense of humour has always been abundantly bizarre, but in recent years it has acquired a distinctly lavatorial odour. It might be to paraphrase the lyrics to "Honey Don't You Want A Man Like Me" and "Illinois Enema Bandit", just what all them college educated women need. It might not. The trouble is the laughs now wear off fairly fast.

The amount of band in-jokes that can be mutated into skits to which Zappa's by now highly polished technique of aural dramatization can be applied is no doubt endless, also blessed to varying degrees with a redeeming social commentary value. But the technique itself has become far too facile – Zappa probably knocks these numbers out before breakfast – and hence perilously close, again, to selfparody.

As for the instrumental selections, beyond a cheesy horn-led version of "Sofa", and sax solo by Mike Brecker proving he can be more than merely an insipid session hack, it's all just expertly performed Grade B material.

Admirers of Zappa's guitar prowess are redirected to "Bongo Fury", and those who wish to sample proot ot Zappa's musical gifts should opt for "Zoot Allures" or, especially, "One Size Fits All".

Probably owing in some way to Zappa's contract troubles, "Live In New York" is irritatingly short – one side, after the removal of "Punky's Whips", runs a mere ten minutes – and musically inadequate and inconsequential.

Good only for a few chuckles, dispensable thereafter.