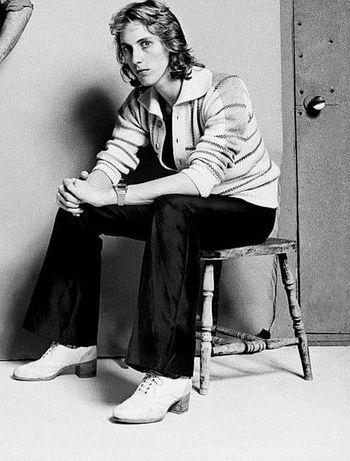 Eddie Jobson, as depicted on the album cover of Zoot Allures, despite not actually performing on that album.

Eddie Jobson (May 28, 1955) is a British violinist, singer and keyboardist, who during his early career played in bands as Fat Grapple, Curved Air and Roxy Music. He also contributed performances on King Crimson's "USA" album and several solo albums by members of Roxy Music, The Who and Deep Purple.

Jobson caught Frank's attention when his band Roxy Music opened for Zappa at the Mecca Auditorium, Milwaukee on 28 November 1975. Zappa asked Jobson to accompany the Mothers Of Invention the following month for a week in Canada. Eddie guest performed on violin in Hamilton, 7 December, and Montreal on 8 December - all the while playing with Zappa in dressing rooms and hotels as Frank assessed his talents - and became a member of the band in 1976. Jobson appeared on the cover of Zoot Allures though he didn't play a note on it. He did however perform on Zappa In New York.

In 1977 Jobson left Zappa and formed the progressive rock supergroup UK. Terry Bozzio performed drums and percussion on UK's albums "Danger Money" and the live set "Night After Night" In 1980 UK broke up and Jobson briefly joined groups and artists like Ian Anderson, Yes, while pursuing a solo career.