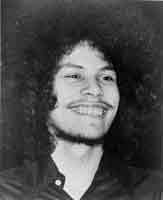 Shuggie Otis is the eldest son of R&B pioneer and bandleader Johnny Otis. He started drumming at age 4, made his recording debut in 1962 at age 12, playing guitar behind former 'Raylette' singer Ethel Fort, and released his solo recording debut at age 15. In 1969, Shuggie recorded for Frank Zappa, and provided bass for Hot Rats.