By Rip Rense
Special to The Journal
The Milwaukee Journal, December 18, 1994 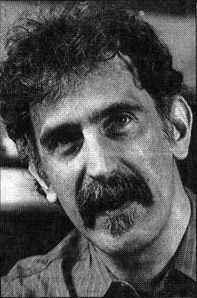 For the last 10 years of his life, Frank Zappa worked obsessively on "Civilization Phaze III," a sprawling, 113-minute epic. It marked the most complex and ambitious musical experimenting of his career.

Finishing the massive work assumed an increasing urgency after the musician/composer was diagnosed with cancer in 1990. He made the last minor adjustments only weeks before his death, at 52, on Dec. 4 last year.

"I think it's very much about finishing his life," said Gail Zappa, his widow. "I would call this his masterwork. He said that after he finished this, he had nothing more to do. I asked him, 'Is there anything else you want to tell me about?' He said, 'No, I've done everything that I can.'"

Matt Groening, creator of "The Simpsons" and a friend of Zappa's, described the piece this way: "Listening to it, it feels like Frank was trying to cram as many musical ideas as possible, one after the other, into this piece. It's very thick and dense and overpowering as a listening experience. Even if you think you know Frank Zappa's music, I don't think anybody could be sufficiently prepared for the powerhouse this thing represents.

Liner notes written by Frank Zappa describe the work as "an operapantomime, with choreographed physical activity (manifested as dance or other forms of inexplicable socio-physical communication)." Just before his death, Zappa explained the theatrical concept for the work to choreographer Jamey Hampton, of the ISO Dance Troupe, and Groening, who are planning to stage a production of the work.

"Frank was very specific about his ideas for it," said Groening. "He wanted to use old-fashioned stagecraft, nothing fancy, no TV monitors."

"Civilization Phaze III" culminates a composing career that began when a teenage Zappa was first inspired to put musical notes on paper after hearing the work of avant-garde composer Edgard Varèse.

Although the likes of the London Symphony, Pierre Boulez and Kent Nagano have championed and recorded Zappa's works, he is ironically best known for novel pop-rock satires like "Valley Girl" (sung with daughter Moon Unit), "Dancin' Fool" and "Jesus Thinks You're A Jerk."

Composed largely at the Synclavier, a sophisticated computer-driven synthesizer capable of producing practically any imaginable sound, "Civilization Phaze III" is basically orchestral in texture. About one-third of it was performed by the European new music group, Ensemble Modern. Conceptually and stylistically, the work is a continuation of Zappa's 1967 avant-garde ballet/narrative, "Lumpy Gravy," and his 1966 album "We're Only In It For The Money," which has sometimes been called the "cynical flip-side of 'Sgt. Pepper'."

"I think that 'Phaze III' is perhaps the ultimate destiny of this particular aspect [of Zappa's work]," said Gail Zappa. 'Phaze III' probably started off to be one thing, but because he worked so hard to finish it before he died, it became something a little different than he originally intended."

Why release it mail-order only?

I'm doing it this way," she said, "as an experiment, because I wanted to see who's really out there, and how much attention they're playing to the importance of having Frank's music in their lives."

Could the mail-order process hinder exposure of the music? (The album will likely be marketed in music stores "at some point.")

"It may seem unfair, in many ways, to treat his music this way," she said. "But he gave this record to me. And [it is] of particular importance to me personally. I wanted to make it available to those people who are loyal fans of Frank in this country ... without having to rely on an industry that never supported Frank in any way as a composer."

There are 19 pieces of music in "Phaze III," interspersed with a running dialogue left over from the 1967 "Lumpy Gravy" sessions and new dialogue recorded by Moon Unit Zappa and Zappa associates. For "Lumpy Gravy," Zappa prompted friends to "ramble incoherently" into microphones planted inside a piano, then edited their various speeches into an absurdist commentary that punctuated original orchestral music. "Phaze III" continues that tradition, as Zappa's CD liner notes explain.

"In 'Civilization Phaze III,' we get a few more clues about the lives of the piano dwellers and note that the external evils have only gotten worse since we first met them."

Cover art by Uri Balashov (whose misspelling of "Phase" was promptly adopted by Zappa as the formal title) depicts a massive piano atop a mountainous, fearsome civilization. With or without the "piano dweller" story, the music of "Civilization Phaze III" stands as the most dense and intricate stuff Zappa ever created. At least one of the titles, "Beat the Reaper," we seem to grimly attest to the circumstances under which composer worked.

Groening, a longtime admirer who befriended Zappa late in life, described the sound as "Stravinsky-esque orchestral tunes with Conlon Nancarrow tireless forward propulsion presented with the most cutting edge technology" – adding, in more accessible terms: "This music should finally get Zappa taken truly seriously as a composer. There is nothing else in contemporary music that sounds anything like it. I'll be listening to this piece for the rest of life – that's for sure."

Perhaps the centerpiece of the work is an 18-minute, six-movement composition titled "N-Lite." Zappa insisted the title was merely a convenient, and quite absurd, computer label, as he said in a 1992 conversation. "It's not really a dramatic story. You have only eight letters to name these things in the computer program."

"I think that was part of artistic stance – to not allow himself to be pinned down," he said. "He claimed there was no meaning to the title 'N-Lite.' It was just a name the computer assigned to the piece. I don't believe that. Is it about the end of light? Enlightenment?'"

In any event, it names music that was a breakthrough and a departure in Zappa's long, remarkable career; music that portends things that will, tragically, never come.

"It's called mortality," said Gail Zappa. "I think ['Phaze III'] has a lot to do with Frank knowing that he wasn't going to be able to realize a lot of things that he wanted to do. So then you do what you can. Part of it is an expression of that. I don't think he was in a hurry, as much as he was pragmatic and said. 'I can do this.' I see it as a big time 'Thanks For the Memories,' in some ways."