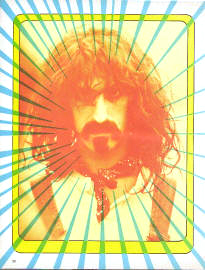 The redwood slat fence loomed high around the house. A piano jumped from key to key inside the two-story structure. A push on the small white button next to the speaker box generated a ringing buzz throughout the house.

"Who is it?" a female voice flowed out of the speaker.

"Okay. Push on the gate when the buzzer sounds."

It was a short walk up some concrete stairs, veering off at a right angle up to the front door. Don Preston, a one-time Mother keyboard player and electronic music expert, and four-year-old Moon Zappa, au naturel, were the greeting party.

Beat Goes On
"Would you like to hear some of the music from the movie?" Don asked.

Quick as the nod, Preston rummaged through the myriad mounds and piles of tapes, trying to find the music.

The opening of "200 Motels" filled the room. There were such delicacies as "This Town Is A Sealed Tuna Sandwich," and "Lonesome Cowboy Burtram, the Redneck."

Frank Zappa entered the room. He sat down on the couch, listening to the music. "Actually I wouldn't have played that for you. There are some much more exotic things," he said as he turned the tape deck off.

With the "SOLD" sign pasted on it, "200 Motels" was close to three months in pre-production, and shot in only seven days. Shooting was all done on Stage A, "one giant stage," at the Pinewood Studios in England.

"I mean, if you have a situation involving an industrial vacuum cleaner, giant newts, a concentration camp at the end of the street, living in the same town with some customary rednecks, and they all sing and dance," he said, "some people would look at that, and say, 'That's not realism,' but I would look at a situation like that and I would say, 'That is more than real.' It takes reality and stretches it to an absurdist limit."

Images and Sounds
"The film medium is great for me. When I write music I think of what I would like someone to see," the head Mother of Invention continued. "When there's only sound, people can misconstrue the intent. Film provides specific images along with specific sounds. It comes out the way I imagined it in the first place."

"Actually, the ideas for my music develop over a period of time," Frank said, spreading out some 20 sheets of pen-inked yellow and white, off-white and shell-colored sheets of music. "I wrote all of this in motels while I was traveling with the band. That's where the title comes from."

Campy Quarters
Music blasted out of the eight speakers, two in each corner of the work room, filled with a collection of "camp" objects. There were things like a car hood, electric guitars, vibes, a four-section Warhol-like Monroe smile, posters, tape reels, film cans, and an immense painting of a cobalt blue car, flames emblazoned across its side, taking up most of the back wall.

"The finale puts rock 'n' roll and classical music right next to each other, along with some perverted combinations that would drive some people to the stretcher."

Different Dimension
After all Zappa's music is just "whatever occurs to me at the time. I take a musical idea or story idea, and work out another musical style to give it a peculiar dimension."

"My music is derived from rhythm and blues in the same way as images on the screen are derived from real life." He still has "Uncle Meat," another surrealistic Zappa film venture, in the can.

"Would you like a preview of our next movie?" Zappa asked.

Living Audio
It was a musical preview of "Billy The Mountain." In living audio, there he was – Studebaker Hawk, the low-budget anti-hero, who could write the Lord's Prayer on the head of a pin, standing on the edge of Billy's mouth.

"One of the things interesting about this is the way speech is mixed in with the music," Zappa lounged in a chair, smiling, almost laughing, as the sounds sifted into our heads. Moon was sitting in his lap. It was almost a typical Sunday afternoon experience in the Hollywood Hills, complete with good music.