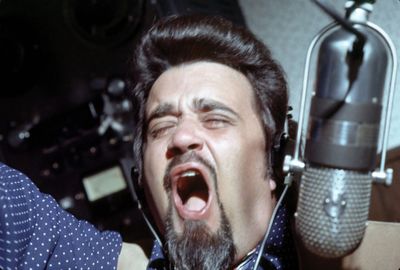 In 1973 his popularity reached a cult status when he played himself in a pivotal role in the film American Graffiti, the soundtrack of which contains 'golden oldie' hits by bands - such as The Spaniels, The Clovers, The Del-Vikings & The Five Satins - all featured by Frank Zappa in his radio presentations as a Fraudulent DJ.

He also mentioned in the liner notes to the song The Legend Of Cleetus Awreetus-Awrightus & the Grand Wazoo on Zappa's album The Grand Wazoo (1972): "Each week, at the same point in the dinner ceremony, just before they serve the oiled pessaries, an exhausted runner crashes through the doors, falls to his knees before the emperor, and wheezes: "They're coming! Quickly! We'll be surrounded!" The runner is then revived (he always blacks out right then) with a transistor radio tuned to Wolfman Jack. Once his consciousness has been regained, guards remove him to another area where he is pumped and waxed for further information."