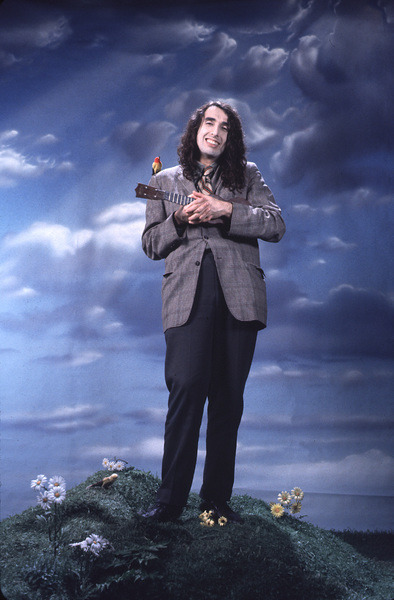 Tiny Tim (April 12, 1932 - November 30, 1996) was an American folk singer and ukelele player, best remembered for his novelty hit song "Tip-Toe Through The Tulips" (1968). He was notable for singing late 19th-century, early 20th-century songs in a high falsetto voice. Tiny Tim was an eccentric personality with a somewhat childlike innocence over him. He's often listed among outsider musicians and notable for being basically the only artist in this genre to ever achieve a number one-hit in the charts and gaining some worldwide fame.

Tiny Tim was a regular in the TV sketch show Rowan and Martin's Laugh-In, where he quickly gained cult popularity. It lead to his debut album God Bless Tiny Tim (1968) and hit single Tip-Toe Through The Tulips, a cover of a 19th-century song. On 17 December 1969 Tiny Tim married live during The Tonight Show with Johnny Carson.

After a long career he passed away on stage in 1996. 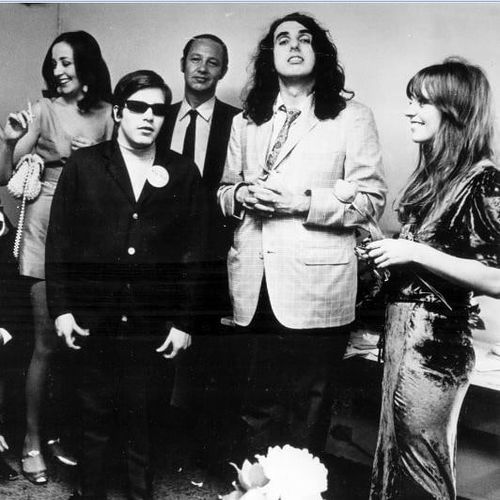 Zappa listed Tiny Tim in his list of influences inside the sleeve of Freak Out! (1966) under the heading: "These People Have Contributed Materially In Many Ways To Make Our Music What It Is. Please Do Not Hold It Against Them".

Tiny Tim also has a cameo appearance in the documentary You Are What You Eat (1968).

In 1968 Zappa's wife Gail and his secretary Pauline Butcher went to a Tiny Tim concert where they met him backstage. A photograph was taken as well.

"I like him, I like his record too... I listened to it. It's got some weird stuff on it. That's the way he really is. He's old enough to be your father. He's really out of question. Any person who carries around a ukelele in a brown paper bag can't be all bad." [1] - Frank Zappa in a 4 May 1968 interview, recorded at the Star Theatre in Phoenix, Arizona.