The Vault is a storage department where Frank Zappa collected all his taped recordings, records, discs, films, audiotapes and other material. Zappa was known for recording every performance and concert he ever made, sometimes just to edit everything down later. Today it's mostly used as an archive. 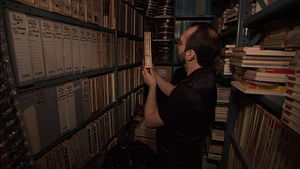 "You've heard about 'the vault'? In the process of building UMRK, a huge storage vault was created to hold all the tapes which Frank had collected during the years. He had pretty much everything he'd ever recorded. It has been 15 years since I've seen the vault so I have no idea what has become of it. I certainly hope they've maintained the environmental controls to preserve the tapes. When I quit my job with Frank we moved a large, fireproof filing cabinet that held all the score and part masters into the vault. Maybe that cabinet is still down there."

"Beneath the house is the vault, a climate-controlled basement room stacked with shelf after shelf of audiotapes and films made by Zappa (who obsessively recorded nearly every concert he gave) in addition to studio recordings of his many band projects and classical compositions."

"Under Frank Zappa's family house in Los Angeles, the 'Vault' is jam-packed from floor to ceiling with every possible recordable audio, video and film media. Within its concrete walls, the temperature-controlled Vault contains literally thousands of tapes, all neatly organized and labeled. 'The Vault is infamous among Zappa fans as a treasure trove of material,' says Joe Travers, official 'Vaultmeister.' Bit by bit, the gems are emerging.

These jewels represent the late Zappa's prolific output, spanning 30-plus years and musical genres from doo-wop to classical. Decades before the global economy, Zappa was selling out international venues that other popular musicians of the time never even dreamed of playing. From his early days around Los Angeles in the 1960s with the original Mothers Of Invention, to world tours, experiments on the Synclavier, and his orchestral works, Zappa relentlessly recorded his musical adventures."