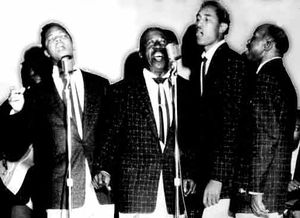 They were originally a gospel group from San Bernardino. They recorded as The Marbles for the Lucky Label during 1953 and 1954. In August 1954 they changed their name to The Jewels and signed to the newly formed Los Angeles based "R&B Records" label. Around this time the group consisted of Johnny Torrence (tenor), Vernon Knight (Baritone), Rudy Jackson (lead vocals), Dee Hawkins (tenor), and James Brown (bass) (the latter not to be confused with "Godfather of Soul" James Brown).

The first release for the R&B label was Jackson's song "Hearts Of Stone". It became popular with the West coast audience and was re-recorded by The Charms on DeLuxe Records who had a national hit with it, although the original remained popular on the West Coast. The song would later be recorded by Elvis Presley. R&B Records soon sold the group's contract to Imperial Records where they would release three records, including a Zappa favourite - Angel In My Life, another Jackson composition, before disbanding in 1956.

Torrence formed another incarnation of The Jewels that recorded one single for the RPM label (She's A Flirt/B.Bomb Baby). Torrence later performed with The Pentagons.

Zappa and The Jewels

"I didn't know anything about twelve-tone music then, but I liked the way it sounded. Since I didn't have any kind of formal training, it didn't make any difference to me if I was listening to Lightnin' Slim, or a vocal group called The Jewels (who had a song out then called Angel in My Life), or Webern, or Varèse, or Stravinsky. To me it was all good music. (...) There were a few teachers in school who really helped me out. Mr. Kavelman, the band instructor at Mission Bay High, gave me the answer to one of the burning musical questions of my youth. I came to him one day with a copy of Angel in My Life -- my favorite R&B tune at the time. I couldn't understand why I loved that record so much, but I figured that, since he was a music teacher, maybe he knew. "Listen to this," I said, "and tell me why I like it so much." "Parallel fourths," he concluded."

While a guest DJ on the 27 November 1968 KPPC, Pasadena Radio Show, Zappa played The Jewels' Angel In My Life.