Angel In My Life 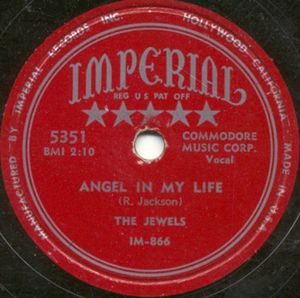 Angel In My Life was a 1955 hit song by The Jewels, released in May of that year. on Imperial Records. The B-side was Hearts Can Be Broken.

Zappa played the record in 1968 as a guest DJ on the KPPC, Pasadena Radio Show.

Zappa about Angel In My Life

"I didn't know anything about twelve-tone music then, but I liked the way it sounded. Since I didn't have any kind of formal training, it didn't make any difference to me if I was listening to Lightnin' Slim, or a vocal group called The Jewels (who had a song out then called Angel in My Life), or Webern, or Varèse, or Stravinsky. To me it was all good music."

"There were a few teachers in school who really helped me out. Mr. Kavelman, the band instructor at Mission Bay High, gave me the answer to one of the burning musical questions of my youth. I came to him one day with a copy of Angel in My Life -- my favorite R&B tune at the time. I couldn't understand why I loved that record so much, but I figured that, since he was a music teacher, maybe he knew."

He was the first person to tell me about twelve-tone music. It's not that he was a fan of it, but he did mention the fact that it existed, and I am grateful to him for that. I never would have heard Webern if it hadn't been for him.