Sandra Elayne Hurvitz (Philadelphia, 23rd April 1948) was a singer and flautist for the Mothers.

While in New York with a couple of friends from Los Angeles they recognised FZ in the street and he gave them free tickets to the Garrick Theater show. After a few days of hanging around the Garrick Theater Sandy was offered a job accompanying flautist Jeremy Steig who opened the early shows. When Don Preston was feeling ill FZ asked her to join The Mothers on keyboards. She would sing duets with Ray Collins and it was he who came up with the name Uncle Meat. FZ liked the name and would introduce Sandy to the audience as Uncle Meat.

"After a couple of months of it I said "Hey I really don't want to be Uncle Meat"! and Frank said "I'm sorry, but I must insist you are." And I said "Well excuse me. Here I thought you were Frank Zappa the wonderful musician and now I find out you're God and you're going to tell me who I am." So a few days went by and he said "Okay you don't have to be Uncle Meat. If you don't want to make money out of the name I will."

When FZ described his idea of a parody of Sgt. Pepper's for the cover of the next record Sandy suggested her ex boyfriend Cal Schenkel as the perfect person for such a project. She herself is also featured on the album cover (see image above).[1]

With the setting up of Bizarre Records FZ signed her up to record an album (Originally planned to be by Uncle Meat And The CIA) with The Mothers backing her. 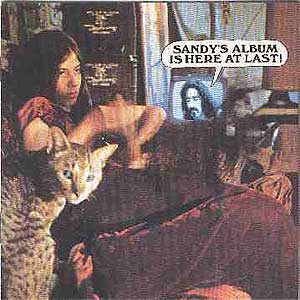 "(It) was gonna be a whole other album. Frank had been producing and we had started on the first tracks and the original Mothers were backing me up. Somewhere that track exists - it's a shame I guess there's no way to get to it - but it's the Mothers playing one of my songs "Arch Godliness Of Purpleful Magic" and I never even got to put my vocal on it. It was great, I still remember Frank's guitar lick over the front of it."

She suggested to FZ that the track would be better if they did another take using Billy Mundi's drumming part played all the way through. FZ disagreed and after a brief argument she stormed out of the studio.

In despair FZ handed the production over to Ian Underwood who had not produced anything before.[2] With The Mothers no longer working on the album he had little commitment to the project and Sandy described the resulting album as just like a stripped down demo. it was engineered by Dick Kunc at Apostolic Studios with Cal Schenkel's cover design and photographs. The record was released by Verve (V6-5064 1968) as part of FZ's deal to end his contract with them.

Sandy Hurvitz changed her name to Essra Mohawk in the early 1970's. She has released several albums under this name with some of her songs being recorded by other artists.