The program was both comedy show, film program and sciencefiction show. It featured a man (in the first seasons Joel Hodgson and later Mike Nelson) and his robot sidekicks (Crow, Gypsy, Tom Servo, Cambot) who are trapped on a space station by an evil scientist. The villain forces them to watch several extremely bad movies in order to drive them insane so he can take over the world. To keep themselves sane the man and his robots poke fun at everything they see in the film. Each film is presented with a superimposition of the man and robots' silhouettes along the bottom of the screen.

The concept of the show was only a vehicle for the hilarious comments about the ridiculous plots, acting and special effects of all these films. Most of the pictures shown in the program were low budget science fiction, horror and monster movies. Mystery Science Theater 3000 quickly received a cult following and even spawned a movie.

Zappa was a big fan of the show, which may not come as a surprise due to his love for all these cheap B-movies. (See Monster Movies, Cheepnis and The Radio Is Broken). In turn all people who made Mystery Science Theater 3000, particularly Joel Hodgson and Kevin Murphy (voice of Tom Servo) were Zappa fans.

" MST3K ... made the late Frank Zappa an instant convert when he channel surfed into "this guy wearing a clown nose and a beanie copter roasting a puppet over an open fire. The clown was now-departed (and much beloved) Founding Father Joel Hodgson; the roasted puppet was plucky Tom Servo; and Zappa was equally bemused by the cinematic turkeys being roasted for the main course. "He just loved crummy old science fiction movies," says writer and voice of Servo Kevin Murphy, who thought "Frank Zappa on line one" was a joke until he picked up the phone. And though Zappa died before fulfilling plans to collaborate with Best Brains on a giant spider movie "told from the spider's point of view," the Mothers of Invention mastermind would have had a field day digging through the moldy vaults now at MST's disposal."' 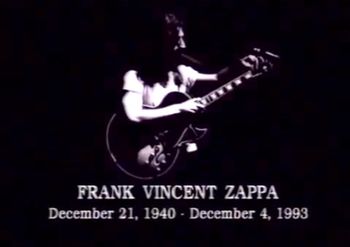 Frank Zappa tribute in Mystery Science Theater 3000 after his death earlier that week.

"Mystery Science Theater 3000" once showed one of Zappa's favorite films "The Killer Shrews" and referenced the cover of Weasels Ripped My Flesh. Other films that were shown and mocked were It Conquered The World and two Godzilla movies. They also referenced his songs and albums a lot. [1]

After Zappa passed away in 1993 the makers dedicated the first episode after his death in his memory. They played a song called "The Greatest Frank of All" (originally written about Frank, one of the villains in the show) over the end credits.

"(...) So instead of listening to the 1910 Fruitgum Company, my brother Chris brought home Frank Zappa’s first album Freak Out!, and this was… what was it, 1966? And here’s this bizarre album, and the first song is “Hungry Freaks, Daddy,” and it’s a double album, and it has bassoons and glockenspiels and just was delightful. It was just weird. One of my first albums when I had the money to buy it was Uncle Meat. (...) Zappa based a lot of what he did on the work of Edgard Varèse, and folks like that, which is very atonal and difficult to listen to. And I think he liked to do that because it put people on edge. I remember him saying in his autobiography that he liked to play the low notes really loud because it always unsettled people more. The high notes would make them irritated and angry but the low notes would make them feel bad and they didn’t know why. (...) I just thought it was fun and weird." - Kevin Murphy. [2]

" (...) The other big thrill was talking to Frank Zappa on the phone. (...) We got a call from Wally Nicita at Warner Brothers. Wally went on to have, and continues to have, a terrific career as a producer and exec. She was putting this together for Frank. She was a friend of Franks. I think that was part of it, was he had a script. A very, very weird script. You’d expect nothing less. He was dying. He was not even a year away. And he knew he was dying, and he just wanted to have as much fun as he could in his last few months. Then Wally called us up and said, “Frank Zappa has this script and he has watched you guys and he thinks you’re out of your gourds, and he’d like you to consider developing it into a movie.” And I said, “Yeah, uh-huh, that’s neat, that sounds really cool. Who are you again?” She said, “Wally Nicita from Warner Brothers.” And I said, “Okay, tell you what. Why don’t you have Frank call us.” She sounded a little put out, and she said, “Well, I’ll see what I can do.” She hung up, and a half an hour later, over the PA I hear, “Kevin, Frank Zappa’s on the phone for you. (...) I didn’t know what to say. I wanted to say, “I started listening to you… it was in summer in Lake Geneva, Wisconsin, and my brother brought home Freak Out! and I’d never heard anything so fucking weird in my life.” (...) but the first thing he said is, “You know, when I knew that you guys were cool was when I turned on the show, and there’s Joel, and he’s wearing a clown outfit and he’s roasting a puppet over an open fire.” And he said, “I knew you guys were too fucking weird for words.” So we had a little mutual compliment for each other. (...) It truly blew me away. And he said, “I’ve got this script, and it’s political and weird and I’d like you guys to consider doing it.” Then he sent the script and he sent some cassettes of some music that he had in mind to do the score for the thing. The essential idea was wonderful. He wanted to completely do the soundtrack and the score first, and then lip synch the entire movie. It was going to sort of be The "Queen of Outer Space" - you know, the spider lives in a cave on the moon? (...)Except told from the spider’s point of view. (...) It was a lot of songs that he’d either released or was just doing on his beautiful synthesizer machine. At the time he was pretty sophisticated into sampling and sequencing before a lot of people were, so he had stacks and stacks and volumes with music and scores already written. And they were released because he had these contractual obligations. and albums came out like Sleep Dirt and Studio Tan. Then they had some of these orchestral things that he’d done, and they were just wonderful. Sort of splendid weird pageantry. This is what he had in mind. He had already written “Spider Of Destiny,” which was one of the songs on there. The spider becomes a sex slave of the queen of outer space, and that’s part of the story. And it just got weirder and weirder and weirder from there. It would have been wonderful. He had actually talked to Terry Gilliam about doing it, too. That would have been quite a combination. (...) It was a weird time, and the timing couldn’t have been worse, because this is when Joel was sort of going through the period of determining to leave the show. (...) Well, I talked to Frank and asked him to give us a little time, here. We’d like to consider it, but it’s nothing that we can move on right away. And he said, “Well, think about it, because I’d love you to do it,” and that’s when he sent the script and the tapes. We talked to Wally again, and she said, “If you can do it, this is the time to go, because Frank is not a healthy man.” We really, sadly, had to sort of walk away from it because, at that time, we didn’t know where we were going, much less trying to develop a script for Frank Zappa. It would have been fun. I don’t regret it. There’s very few things I regret. But it would have been fun." - Kevin Murphy.