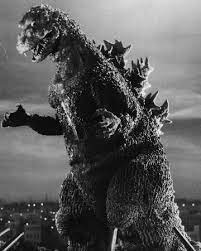 Godzilla is a long running (1954- ) series of Japanese monster movies about a gigantic dinosaur-like monster who attacks Japan. The original three films were respectable horror films, but during the 1960s and 1970s the franchise became increasingly cheap, surrealistic, infantile and silly. In the 1980s and beyond the series were given new fresh energy and Godzilla was restyled as the original indestructible monster he was before.

Toho Studios made many movies with Godzilla fighting other monsters including Mothra and Rodan. Godzilla became so popular that other studios tried to make similar monster films, like Gamera and Gorgo.

In 1998 an American remake was made, "Godzilla", which had nothing to do with the original films and disappointed many fans.

Ahmet Zappa's third name, "Rodan", is a reference to the Japanese movie monster Rodan. This is a pterodactyl who often fights Godzilla.

In Cheepnis the gigantic monster Frunobulax is said to have "just ate Japan."

Godzilla is referenced in Zappa's song Jesus Thinks You're A Jerk.