It Conquered The World

It Conquered The World is a 1956 science fiction film about an alien from Venus trying to take over the world with the help of a disillusioned human scientist. It was directed by Roger Corman. Famous actors in this film are Peter Graves and Lee Van Cleef. 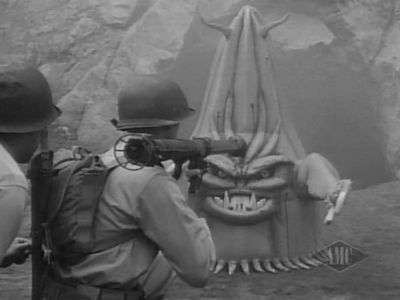 The actual monster from the movie

During the introduction to his song Cheepnis Zappa mentions this film and describes a scene where the strings of the monster can be seen and as a consequence the puppet is then pulled back from view. He also pokes fun at the monster's appearance and the cliché that the actress in the film falls and trips her ankle.

Despite Zappa's description however, the scene with the monster being pulled back from view is nowhere to be seen in the movie.

The film was also shown in Mystery Science Theater 3000.

The DVD box cover of Roxy: The Movie (2015) references the art work of the movie poster of "It Conquered The World".