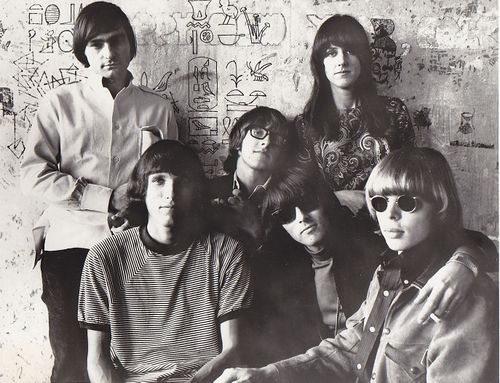 Jefferson Airplane is an American rock band from San Francisco, active within the psychedelic rock movement and blossoming between 1966 and 1972. They were the first San Francisco group to perform at a dance concert[1] — the 'happening' at the Longshoremen's Hall in October 1965, the first to sign a contract with a major record label, the first to appear on American national television, the first to score hit records and the first to tour the US East Coast and Europe. Their lead singer was Grace Slick.

Jefferson Airplane scored hits with Somebody to Love (1967) and White Rabbit (1967).

Zappa liked Jefferson Airplane and vice versa. At one point he wanted their lead singer Grace Slick to appear in Captain Beefheart vs. The Grunt People, (according to a 1969 Rolling Stone interview)

"Grace Slick was another visitor. In her autobiography, she describes the Log Cabin as: "like a troll's kingdom. Fuzzy-haired women lounged in long antique dresses, and naked children ran to and fro while Frank sat behind piles of electronic equipment discussing his latest ideas for orchestrating satirical hippy rock music — openly [making] fun of the very counter-culture he was helping to sustain." - The Fabulous Furry Freak Brother!, 2012.

Zappa and Grace Slick wrote Would You Like A Snack?(Slick/Zappa) together, which was originally intended for the Jefferson Airplane album Crown Creation (1968), but eventually ended up on the CD reissue of their later album Jefferson Airplane Loves You (3CD, RCA 09026-61110-2, October 27, 1992). Despite the similar title this song is not the same as Zappa's Would You Like A Snack? on 200 Motels.

"I remember I did a show in a Boston with this guy that was really a Nazi of the first magnitude and he brought me on there with two of the kids from the Jefferson Airplane. He was going to play us off against each other , he thought. He comes on there, and I didn't know what was going on . He starts hitting on me: "Your music is ugly, everything you do is ugly - ugly." and it's really in that tone of voice, you know. Grace and Spence from the Airplane are sitting there and going: "What is this? We like his music , it is wonderful." This guy is saying: "No, it's ugly. Listen to this", and he had this cartridge all ready - you know - and he puts on "I Ain't Got No Heart", which is one of the songs from the album that has a big orchestra on it, and when this big orchestra comes on it's Frank Zappa (Mothers of Invention), not ugly, it 's nice and it sounds like a composer named Bloch that many people might not be familiar with, you know. It comes on and it is banging and smashing away and he said: "Oops!" He had made a mistake and played the wrong one . It was just a comedy of errors, you know. A lot of people are out to prove that what we do is ugly and hateful." - Frank Zappa in Pop Chronicles interview, 1967.

Interviewer: In what category would you fit the Jefferson Airplane?

Frank Zappa: "Well, they started out as being modal city. I liked the stuff on the first album more than the second. As a matter of fact, they asked me to produce their third album. I couldn't do it, 'cause I couldn't leave the [Garrick] theatre [in New York] just to go out there and do it, which means a loss of a lot of money." - Frank Kofsky interviews FZ, 1969.

Gracie Slick of the Jefferson Airplane once called you the most intelligent asshole she's ever met. What do you think she meant by that?
Zappa: "I don't know. Would you presume that "asshole" has a negative connotation? Maybe she likes assholes. Hitler was an asshole. He just had a good p.r. department. Also a good tailor." - Quoted from Dialogue: Frank Zappa, COQ, February 1974.