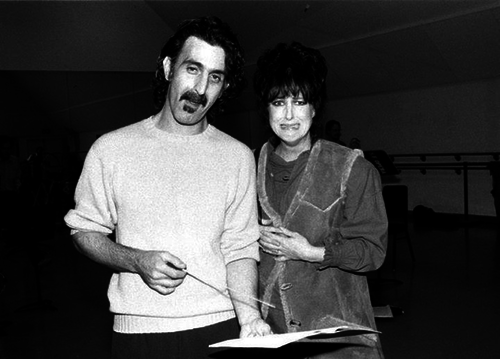 Grace Slick (born Grace Barnett Wing, October 30, 1939) She was a singer/songwriter, and second and most famous lead singer of Jefferson Airplane. From the mid-1960s to the mid-1990s she also had a solo career

Zappa wanted (according to a 1969 Rolling Stone interview) Slick to appear in Captain Beefheart vs. The Grunt People. They had written and recorded Would You Like A Snack? together.

At the Fillmore show (14th November 1970) Slick appeared on stage to announce that Jefferson Airplane and The Grateful Dead would be playing a surprise concert there on the 16th November. Zappa teased: “Do you want Grace Slick to sing Louie Louie? Would that be the ultimate get-off for a Fillmore East audience or what?” Slick declined the invitation.

Interviewer: Gracie Slick of the Jefferson Airplane once called you the most intelligent asshole she's ever met. What do you think she meant by that?


Zappa: "I don't know. Would you presume that "asshole" has a negative connotation? Maybe she likes assholes. Hitler was an asshole. He just had a good p.r. department. Also a good tailor." - Quoted from Dialogue: Frank Zappa, COQ, February 1974.

"He [a gentleman named Erik] gave me a Finnish pornographic magazine that had some girls in it that I couldn't even believe that they would take pictures of 'em. There was one or two in there that looked like Grace Slick but the rest of 'em were hurtin', really hurtin'." - Frank Zappa about the inspiration for Ms. Pinky, liner notes to Lonely Person Devices in You Can't Do That On Stage Anymore Vol. 6.

"Frank Zappa was pretty good at business. And Frank Zappa didn’t do drugs either. Drugs really get in the way of paying attention to what your accountant’s saying because it’s so boring." - Grace Slick, 2001. [2]