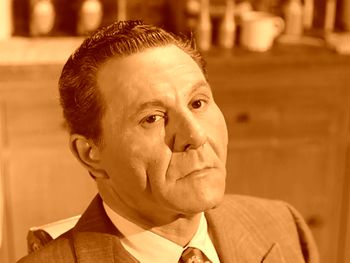 Herman Rudin in The Untouchables.

Herman Rudin (December 26, 1912- December 12, 2000) was an American actor. He was a regular on the tv series The Untouchables, playing an unnamed henchman, Max Gort, Benny Rivas, Bochek, Rosie, Mace and the recurring role of Tony Volpe.

Zappa mentioned Rudin in his list of influences inside the album sleeve of Freak Out! (1966), under the heading: "These People Have Contributed Materially In Many Ways To Make Our Music What It Is. Please Do Not Hold It Against Them". Other actors from The Untouchables are also mentioned in this same list: Frank DeKova, Bruce Gordon and Joe De Santis.

In The Fanzine Questionnaire Zappa claimed that Rudin was his favorite actor.