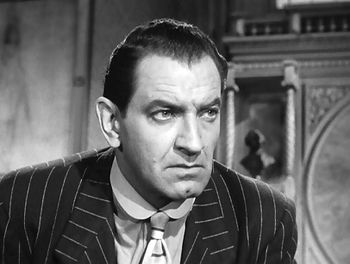 Bruce Gordon as Frank Nitti in The Untouchables.

Along with Marilyn Monroe and Paul Valentine, Gordon was given an "Introducing" credit in the 1949 Marx Brothers opus "Love Happy". The swarthy, cleft-chinned Gordon played one of the henchmen of villainess Ilona Massey (the other henchman was Raymond Burr).

After spending the 1950s in "heavy" film roles, Gordon was shown in a rare heroic light as American intelligence agent Matson on the 1958 TV series "Behind Closed Doors". He had a recurring role as Gus Chernak in the TV series Peyton Place.

Zappa mentioned Gordon in his list of influences inside the album sleeve of Freak Out! (1966), under the heading: "These People Have Contributed Materially In Many Ways To Make Our Music What It Is. Please Do Not Hold It Against Them". Other actors from The Untouchables are also mentioned in this same list: Frank DeKova, Joe De Santis and Herman Rudin.