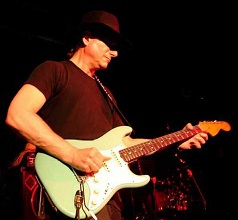 "When Frank Zappa died, it occurred to me that I wouldn't have been surprised if he'd actually been "disappeared" by some official agency, not unlike other overly outspoken youth-friendly leaders. Zappa's one of the great seminal figures of both iconoclastic music and social commentary. He took up the mantel of contrarian naysayers like Lenny Bruce and continued, as Jimi Hendrix put it, to wave his freak flag high. He was scathingly honest about everything from government to consumerism, skewering sacred cows and generally getting up people's noses. Frank's musical genius was his ability to integrate his compositions into diverse arrangements, turning on a dime from the highest of high art to the dirtiest doo-wop, always with an amazing sense of humor."[1]

In a 2011 interview about Captain Beefheart Lucas tells that he actually bought Trout Mask Replica because he saw that it was produced by Frank Zappa, whom he loved. When Zappa and Beefheart starting touring together in 1975 he was surprised since he assumed that they hated each other.[2]