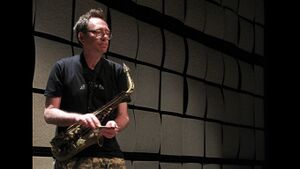 John Zorn (New York City, September 2, 1953) is an American composer and alto saxophonist. His eclectic music is often categorized as "jazz", but is actually difficult to define. It combines different musical styles, genres and moods, often in one composition.

Zorn was interviewed in The Revenge Of The Dead Indians.

In an interview with "Jazz Times" Zorn said: ""Zappa was a very special person. He was really articulate; he really cared about politics. He had a lot of things going for him. I can’t step in Zappa’s shoes. I’m not politically aware. I don’t read newspa­pers; I don’t read magazines; I don’t watch television. So I have no idea. Zappa was on top of everything, man. He was really amazing. I’m not really an articulate, polit­ically minded, forward thinking person with goals that wants the world to be this way or that way. I’m not an interesting in­terview in that regard. I wish I was. I wish there was someone who could be there in Zappa’s place. I’m not the guy."[1]

Zorn mentioned Zappa again in another interview with "Jazz Times":

Zorn: "(...) You know, there’s a frame around a composition and there are things that belong in the frame and things that don’t. And it’s the bandleader-composer’s job to make sure that everything fits. But the most important thing is to keep that balance, where everything belongs but the players are injecting themselves into the work and doing their best. Duke Ellington was a perfect example of that."

Zorn: "Yes, though Zappa in the earlier years. Then it got a little different for him. He got more and more into control. For me, in his later years, his best record is Jazz From Hell, where it’s all done on a Synclavier."

JazzTimes: "Yeah, I think his comment at the time was, “At last, I’ve found my perfect band.”"

Zorn: "There you go! It’s him playing everything. Well, I don’t think that way. Because the lesson I learned from Zappa was that you treat your band members like royalty. You give them as much money as you can afford to give them on the road, the best situations in the hotels, treat them to meals, thank them for their work, appreciate their creativity and just thank your lucky stars that they’re in your band working with you." [2]