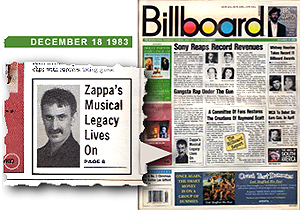 On December 18, 1993 Billboard - the recording industry's "International Newsweekly of Music, Video and Home Entertainment" - ran an obituary on Frank Zappa, written by Drew Wheeler (now Editor of Jazz CD). The issue featured a cover inset photo of FZ with the byline "Zappa's Musical Legacy Lives On".

The article began with three short column inches on page 8 under the heading "Zappa: A Man Who Knew No Boundaries Musical Innovator, Counterculture Hero Was 52" and was concluded on the entirety of page 131.

Because much of the historical content regarding FZ's works in this extensive article is already covered in depth in the FZ Biography & Discography of this wiki, only the salient comments from musicians made to Wheeler regarding FZ's life have been extracted and appear below. A full transcript can be found by subscribing to the Billboard back-issue archive at [Billboard]

On page 17 of the issue RYKO placed a full-page illustration by Cal Schenkel. 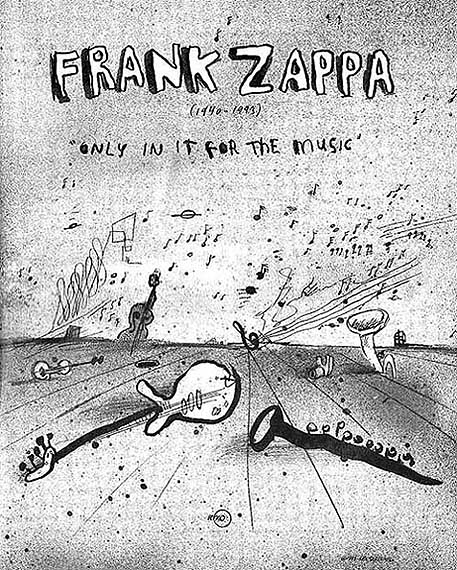 "The best thing that can be said about Frank's death is that he will live on, truly," says Adrian Belew, former Zappa guitarist and vocalist. "You can't say that about many careers. His is going to extend on, and he'll have an effect on 21st Century music, there's no question about it."

Similar sentiments are expressed by Steve Vai, another former Zappa guitarist. "One hundred years from now...Frank and his music will be revered and celebrated."

Zappa's recorded legacy is massive... Of his remarkable output, Belew says, "You never would meet a person who worked as many hours or harder than he did. He was totally relentless."

Zappa reformed The Mothers... now fronted by Flo & Eddie- aka Mark Volman and Howard Kaylan of '60s hit makers The Turtles. "He was a guy who was able to combine so many elements, notwithstanding the most important element...his sense of humor," says Volman. "I enjoyed being in that particular Mothers- it was so much fun... When we were in the band, when Flo & Eddie were on stage, all we ever tried to do was crack Zappa up. If you listen to those albums, you can hear him laughing at us. When you made Frank Zappa laugh, that was it."

Through years of recording and touring, Zappa's bands often were joined by established musicians, while also serving as a springboard for new talent... "He was, for me, the kind of person that it was a pure joy to be around," says Belew, who first encountered the public eye on tour with Zappa. "I learned so much in 10 month's time just walking around that person."

Much of Zappa's recording work was done in his state-of-the-art home studio. "I was always just totally amazed by everything he was doing," says Belew. "Once I went there and I said 'Frank, how did you get all this stuff?' He had this beautiful studio. He said, 'Simple. I don't do coke.' "

In recent years, the New York-based Orchestra For Our Time, led by conductor/orchestrator Joel Thome, has performed Zappa works in acclaimed programs titled The Music of Frank Zappa and Zappa's Universe ... Modern composer Nicolas Slonimsky, a friend of Zappa's, says, "He had a remarkable talent to create pieces completely out of the ordinary, so that he can appear to be composing something totally new and yet sounding very old."

...a live recording by The Ensemble Modern, conducted alternately by Zappa and Peter Rundel...The Yellow Shark was, Zappa felt, the most accurate performance of his often dizzyingly complex works. Sadly, his failing health forced him to return home before the completion of the concert series. "His fight was so powerful in all things, including his fight for life," Thome says.

What set Zappa apart from other outspoken rock performers was his continual exhortation for his listeners to become involved in American democracy... On his 1988 Broadway The Hard Way tour, he conducted registration drives that placed about 11,000 new voters on the rolls. "He believed that government is in the hands of the totally corrupt, and the only way the government can be saved is by getting uncorrupted young people to get out and vote," says Daniel Schorr, Zappa's friend and senior news analyst for National Public Radio.

In September 1985, Zappa testified at hearings of the Senate CTTC on the PMRC's proposal to place warning stickers on recordings. Zappa told the committee [it] was "an ill-conceived piece of nonsense which fails to deliver any real benefits to children, infringes the civil liberties of people who are not children, and promises to keep the courts busy for years." He continued, "The PMRC's demands are the equivalent of treating dandruff by decapitation."

In 1990, Zappa travelled to the Soviet Union & Czechoslovakia under the aegis of the Financial News Network, now part of CNBC. Longtime Zappa fan and newly elected Czechoslovak president Václav Havel (now president of the Czech Republic) met with Zappa and proposed that Zappa become a special ambassador for trade, culture and tourism. The appointment was rejected by the U.S. State Department... Hearing of the news of Zappa's death, Havel paid tribute to him as "a friend of our newly born democracy and one of the first people to visit here after the revolution. Although he never became an ambassador for Czechoslovakia, he was a friend of our country."

(A footnote to the article is as follows):

In lieu of flowers, the Zappa family requests that donations be made to the Office For Intellectual Freedom at the American Library Association, 50 E. Huron, Chicago, Ill., 60611, or to the Cousteau Society, Greenpeace, or any favorite environmental cause.