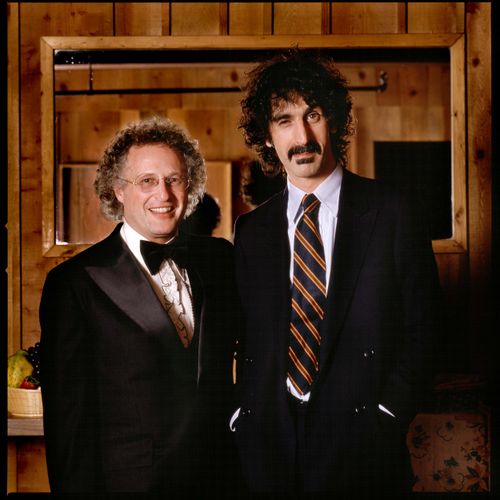 Joel Thome is an American conductor. He was subject of the 2012 documentary Inside The Perfect Circle. The Odyssey Of Joel Thome.

In the 1960s Thome first heard Zappa: "What struck me about Zappa was his tremendous knowledge of music, that he was able to encompass so much music that he was hearing: Stravinsky and Bartok and Webern and Schoenberg. And he was talking about the music that influenced him and I was very struck by the fact that he gave credit to the people who had influenced him and also in the depth of the music that had influenced him."[1] He also added: "Frank was certainly a genius. I love the Dadaist concepts in his work." [2]

In 1980 he met Frank Zappa when they worked on a tribute to Edgar Varèse at the Palladium in New York City, after which they became friends and colleagues. [3] They collaborated on his symphony orchestra pieces with the Buffalo Symphony Orchestra. [4]

In November 1991 Thome conducted, arranged and directed the Zappa's Universe concert at the Ritz Theatre in New York City. The album received a Grammy Award for Best Rock Instrumental (1994).

"I remember working on Zappa's Universe, and mentioning to him what I wanted to do with "Oh No," which I heard as a full-blown orchestra piece. I said, "I'm going to set this in a Webernesque way," and after I explained more he said, "Sounds like Webern's chamber Symphony, opus 21." Believe me, few musicians would have known that. When I mentioned that I'd end it in a Mahleresque way, he loved that too. His compositions became more articulate as the years went by; there were certain compositional problems he was solving. There was a period when he said, "I'm not going to write for human beings anymore" – the mid-'80s, maybe earlier. He couldn't stand the lack of rehearsal time, people coming in unprepared, and unsatisfying performances. I knew where the statement was coming from. Not from the fact that he didn't want humans to hear his music, but from the fact that his electronic work was becoming more and more in tune with what he heard in his head. It definitely precipitated the Synclavier stuff, largely because he could do things with instrumental sounds that he couldn't achieve with live instruments; technically they wouldn't have the range. I remember he called me late one night and played a passage on Synclavier that sounded like traditional instruments, but at a speed that never would have been humanly possible. He spoke from the heart about the ways that he was robbed by the cancer. "I used to be able to work 22 hours a day, and now I'm only going to be able to work 18. Rats." He worked right till the end. His creative soul was always filled with music. The silence of Frank's voice is deafening; the sound of his music will live forever."