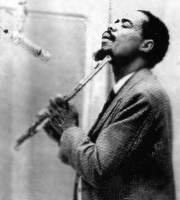 Dolphy was an influential jazz multi-instrumentalist (flute/alto saxophone/bass clarinet) who played with artists such as Chico Hamilton, John Coltrane, and Charles Mingus.

He was classically trained and admired the works of Edgard Varèse (he recorded Density 21.5) and supported the Third Stream movement.

One of Dolphy's most influential, and highly regarded, albums was Out To Lunch, a phrase Zappa used in the lyrics of Oh No, in 1964. Shortly after the album was released Dolphy died from undiagnosed diabetes, while touring in Europe with Mingus.

Dolphy's name, and work, popped up again as a theme The Eric Dolphy Memorial Barbecue on Weasels Ripped My Flesh in 1969, and it is claimed that part of the cover design for Burnt Weeny Sandwich was originally intended for an album by Dolphy that was never released.

Dolphy is included in the list of names on the Freak Out! cover.