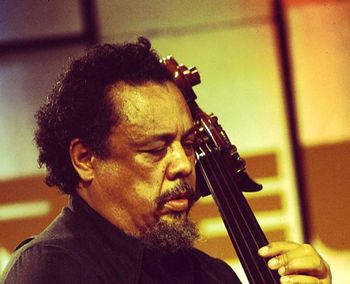 Charles Mingus (22 April 1922 - 5 January 1979) was an American jazz composer, pianist, double bassist and bandleader. He is widely regarded as one of the most iconoclastic and influential jazz musicians of the 1950s and 1960s. As a bassist, he knew few peers, blessed with a powerful tone and pulsating sense of rhythm, capable of elevating the instrument into the front line of a band. But had he been just a string player, few would know his name today. Rather, he was the greatest bass-playing leader/composer jazz has ever known, one who always kept his ears and fingers on the pulse, spirit, spontaneity, and ferocious expressive power of jazz.

Mingus played with Louis Armstrong, Lionel Hampton, Red Norvo, Billy Taylor, Stan Getz, Art Tatum, and Duke Ellington (he had the dubious distinction of being the only man Ellington ever personally fired from his band). He was the bassist in the famous 1953 Massey Hall concert in Toronto with Charlie Parker, Dizzy Gillespie, Bud Powell and Max Roach (available through Debut Records, a company he founded himself in 1952).

His sidemen included Eric Dolphy (also name-checked on the cover of "Freak Out!"), Jackie McLean, J.R. Monterose, Jimmy Knepper, Roland Kirk (also name-checked on the cover of "Freak Out!"), Booker Ervin, Emil Richards and John Handy. The groups with Dolphy (heard live on "Mingus At Antibes") in the early '60s might have been his most dynamic, and "The Black Saint and the Sinner Lady" (1963), an extended ballet for big band that captures the anguished/joyful split Mingus personality in full, passionately wild cry - may be his masterpiece.

Mingus was also a passionate campaigner for civil rights. Mingus' obsessive efforts to free himself from the economic hazards and larceny of the music business nearly undermined his sanity in the 1960s (some of the liner notes for "The Black Saint" album were written by his psychologist, Dr. Edmund Pollock).

At the same time Mingus made a lot of enemies, causing sometimes violent confrontations on and off the bandstand. A big man physically, he used his bulk as a weapon of intimidation, and he was not above halting concerts to chew out inattentive audiences or errant sidemen, even cashiering a musician now and then on the spot. His legacy was therefore universally lauded only after he was no longer around to bug people.

Zappa names Charles Mingus in his list of influences on the sleeve of Freak Out! (1966), under the heading: "These People Have Contributed Materially In Many Ways To Make Our Music What It Is. Please Do Not Hold It Against Them".

Musician: Were you ever exposed to some of the jazz that preceded that, like bebop?

Zappa: "I didn't hear any bebop until I moved away from San Diego, and moved to Lancaster, and I came across a Charlie Parker album. I didn't like it – because it sounded very tuneless, and it also didn't feel like it had any balls to it. But I did get an Oscar Pettiford album that I thought was good, and I had some Charlie Mingus, albums that I really liked."