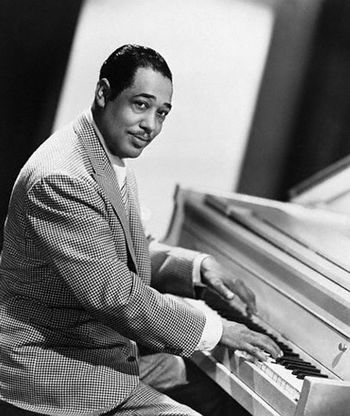 Edward Kennedy "Duke" Ellington (Washington DC, April 29, 1899 - May 24, 1974) was an American jazz musician, composer, bandleader and pianist, regarded as one of the greatest composers in jazz. Some of Ellington’s greatest works include "Rockin’ in Rhythm", "Satin Doll", "New Orleans", "A Drum is a Women", "Moon Indigo", "Take the 'A' Train", "Happy-Go-Lucky Local", "The Mooche", and "Crescendo in Blue". Ellington and his band went on to play everywhere from New York to New Delhi, Chicago to Cairo, and Los Angeles to London. Ellington and his band played with such greats as Miles Davis, Cab Calloway, Dizzy Gillespie, Ella Fitzgerald, Tony Bennett and Louis Armstrong. They entertained everyone from Queen Elizabeth II to President Nixon. Before passing away in 1974, Ellington wrote and recorded hundreds of musical compositions.

Early in his career, when Zappa and the band performed in El Monte, someone in the audience asked them to play Ellington's composition Caravan, but "with a drum solo". Zappa would use this quote twice, on You're Probably Wondering Why I'm Here on Freak Out! and in "America Drinks & Goes Home" on "Absolutely Free" (1967). According to Foggy G ("We're Only In It For The Touring") they briefly played Caravan in November 1972 and 21 July 1974 on stage.

During a jazz festival at the Coliseum in North Carolina on 28 June 1969 Zappa and the Mothers met Duke Ellington, who performed at the venue, alongside other acts such as Gary Burton and Roland Kirk. According to Jimmy Carl Black Ellington liked the Mothers' music: "It was our first time in North Carolina and it was a jazz festival, with Gary Burton, Roland Kirk, The Mothers and Duke Ellington and his band headlining. Duke Ellington told me he thought that The Mothers where a great band and that he liked what we were doing. Roland sat in with us again here." [1] At the same event however, Zappa claimed to have witnessed Ellington begging for a ten-dollar advance, which motivated him to disband the Mothers.

Zappa quoted from Satin Doll during a performance of Dupree's Paradise in Stockholm, Sweden, on 21 August 1973 (which can be heard on Piquantique (BTB)).

Duke Ellington was also mentioned and thanked in the liner notes of The MOFO Project/Object (2006) album. [2]

"Well, we were hired as the entertainment at this Grammy awards show, and Duke Ellington was actually in the audience, by the way. [30] Woody Herman, I believe, was the band that would play the music when people got awards, and we were brought on to do a little fifteen-minute set, and this is a room full of people in tuxedos, and y'know, all fancy, fancy, fancy ... (...) So, we did our show with broken dolls, and rancid versions of ... y'know, just the type of ugliness that we used to do in 1967 [including "Satin Doll"]." - Frank Zappa in They're Doing the Interview of the Century, Part 2)

"In 1969, George Wein, impresario of the Newport Jazz Festival, decided it would be a tremendous idea to put the Mothers of Invention on a jazz tour of the East Coast. We wound up working in a package with Kirk, Duke Ellington and Gary Burton in Miami at the Jai Alai Fronton, and at another gig in South Carolina. The touring package did not carry its own PA - we had to use whatever speakers existed in each of the venues we were booked into. The hall in South Carolina was rigged with small jukebox speakers, set in a ring around the building. Useless, but there we were - we had to play the show. Before we went on, I saw Duke Ellington begging - pleading - for a ten-dollar advance. It was really depressing. After that show, I told the guys: 'That's it - we're breaking the band up.' We'd been together in one configuration or another for about five years at that point, and suddenly EVERYTHING looked utterly hopeless to me. If Duke Ellington had to beg some George Wein assistant backstage for ten bucks, what the fuck was I doing with a ten-piece band, trying to play rock and roll - or something that was almost rock and roll?". - Frank Zappa in The Real Frank Zappa Book (1989)).