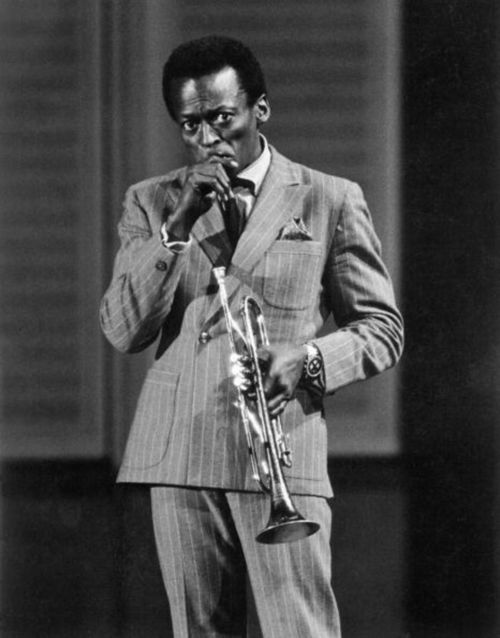 Miles Dewey Davis III (26 May 1926 – 28 September 1991) was an American jazz trumpeter, bandleader and composer. During the 1950s and 1960s he established himself as one of the most distinguished and experimental jazz musicians of the second half of the 20th century. He played on various early bebop records and recorded one of the first cool jazz records. His most classic albums are: "Birth Of The Cool" (1952), "Kind Of Blue" (1959), "Sketches of Spain" (1959) and "Bitches Brew" (1969).

According to page 95 of Mike Barnes' biography, "Captain Beefheart" (Quartet Books, 2000) Zappa and Captain Beefheart used to listen to Miles Davis and Gil Evans' album "Sketches of Spain" when they were teenagers. Interviewed by Robert O'Brian for RockBill Magazine (1984) Zappa said about Davis: "I really liked his music." Zappa went to see Davis playing at the Black Hawk in San Francisco in 1961, but unfortunately the grumpy musician just turned his back to him. Zappa: "I haven't had anything to do with him or his music since that time".[1]

Davis, just like Zappa, once appeared in a guest role on Miami Vice (though not together, nor in the same episode). Sergio Albonico who was a photographer for Davis, once told Frank Zappa about this and Zappa told him that he respected Davis and his band tremendously. [2]