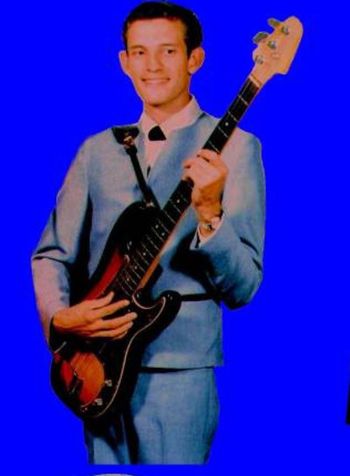 David Lee Aerni (1939 [1]) is an American singer, songwriter, engineer, producer and musician. He was also known as David Songbird or David Lee.

David Lee Aerni began his musical career after his honorable discharge from the Navy in 1961. It all started as an apprentice in Paul Buff's "Pal" recording studio in Cucamonga, California, where had the privilege of working with not only Paul Buff (also name-checked on the cover of "Freak Out!"), but also FZ, Ray Collins, and other "fine" musicians. Aerni is the mostly "forgotten" co-writer of Love Of My Life, a track on the Cruising With Ruben & The Jets (1968) album, released as a pre-MOI, Ron Roman recording ("Love Of My Life / Tell Me"); he overdubbed on FZ's instrumental tracks. He can be heard on the single "Heavies / The Cruncher" (1964, Original Sound OS41) by The Rotations; both tracks can be found on Cucamonga Years - The Early Works Of Frank Zappa (1962-1964). Heavies was also sampled on Nasal Retentive Calliope Music from We're Only In It For The Money (1968). [2]

He managed a surfin' band called The Tornadoes and they had a top selling record (recorded at a studio in Riverside) in Southern California for several weeks running called "Bustin' Surfboards", which was in the top 30's nationwide. The song, written by the Sanders brothers (Gerald, Jesse and Norman) and Leonard Delaney, can be heard on the "Pulp Fiction" soundtrack (1994, MCA, MCD 11103); it was produced by Bob Irwin. The song is can also be found on Rhino's Rock Instrumental, Volume 5: Surf (1994, R2 71605). According to the liner notes (by Dan Forte), it was a regional hit in 1962. Historically it is regarded as the first reverb-soaked instrumental of the idiom and the first single to feature a surf title (however, "Surfer's Stomp" by The Mar-Kets preceded it by about 6 months). In Robert J. Dalley's book, "Surfin' Guitars: Instrumental Surf Bands of the Sixties" (1988, Surf Publications, 1996, Popular Culture, ISBN 1560750421), bassist Gerald Sanders states that his brother, lead guitarist Norman, used an Echophonic Tape Echo unit, not a reverb tank.

Together with the Taunton brothers from Upland, Aerni produced Surfin' Dances at the local armory featuring not only The Tornadoes, but also The Beach Boys and Dick Dale & His Del-Tones. While working at Paul's studio he recorded a rock-a-billy artist named Bobby Ray who needed a bass player for a gig he had in San Bernardino. Aerni had played rhythm guitar about ten years and felt he could handle the bass, so he took the job. Bobby was a fine singer, but had a problem with bennies (benzadrine) and soon lost his job because he was unable to sing. Bass players were (and still are) in demand, so he soon had another job backing another vocalist, Sonny Wilson. During the next few years he played bass with artists like Don Underwood, Eddie Kay (Klinkhammer), Ray Peterson, Sammy Hagar, Ike & Tina Turner, The Coasters, Jimmy Reed, and John Lee Hooker. In the 1970s he got busted for smoking marijuana, and he resided in jail for a month.

Dave Aerni is mentioned in the list of influences in the sleeve of Zappa's debut album Freak Out! (1966), under the heading:"These People Have Contributed Materially In Many Ways To Make Our Music What It Is. Please Do Not Hold It Against Them".