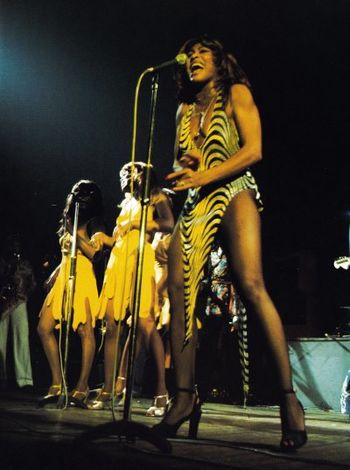 Tina Turner (born Annie Mae Bullock near Brownsville, Tennessee, 26 November 1939) is an American soul, R&B and pop singer, as well as an actress.

She began singing as a teen, and joined Ike Turner's touring show as an 18-year-old backup vocalist - two years later, Tina was the star of the show. Under the name Ike & Tina Turner she performed many succesful shows, scoring hits like A Fool in Love (1960), River Deep - Mountain High (1966), Proud Mary (1971) and Nutbush City Limits (1974). Phil Spector produced some of their records and Dave Aerni sometimes played in their band.

Tina was noted for her loud vocals, mini-skirts and wild dance performances. Unfortunately her husband Ike Turner was adulterous and highly abusive. She divorced him in 1978 and started a succesful solo career, scoring hits like What's Love Got To Do With It (1984), Private Dancer (1984), We Don't Need Another Hero (1985) and (Simply) The Best (1989), among others.

In 1966 Ike & Tina Turner performed at The Big T.N.T. Show, where Frank Zappa was filmed inside the audience.

In the Spring of 1973, Zappa recorded at Bolic Sound in Inglewood, California, better known as Ike and Tina Turner's studio. According to Nigey Lennon he had previously recorded her vocals for some of the songs, but felt they sounded "too white". Zappa: "I wanted to put some back-up singers on... and the road manager said, 'Well, why don't you just use the Ikettes?' I said, 'I can get the Ikettes?' and he said 'Sure'...Ike Turner insisted that we pay these girls no more than $25 per song, because that's what he paid them... No matter how many hours it took." Tina & The Ikettes are credited as "Debbie", "Lynn", and "Susie Glover" on Over-Nite Sensation (1973) and Apostrophe (') (1974). They can be heard during Dirty Love, I'm The Slime, Dinah-Moe Humm, Zomby Woof and Montana, as well as various songs on Apostrophe.