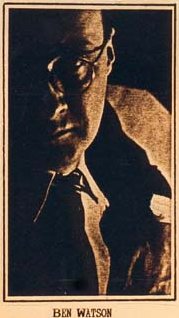 Ben Watson (1956) is a British writer noted for his writings on Frank Zappa. He made contributions to "The Wire" and "Hi-Fi News". His writings display the influences of Theodor Adorno and the Frankfurt School, the Situationists, James Joyce and J.H. Prynne (Watson's tutor at Cambridge University).

Watson wrote several books and articles about Zappa: Frank Zappa - The Negative Dialectics Of Poodle Play (1995), Frank Zappa: The Complete Guide to His Music (1998, revised in 2005) and Academy Zappa: Proceedings of the First International Conference of Esemplastic Zappology (2005). He additionally wrote the article The Last Days of Frank Zappa and an obituary. [1] He is interviewed in Frank Zappa - The Freak-Out List (2010).

Quotes by Watson about Zappa

"I listened to We're Only In It For The Money because my older brother had a copy, but at age 12 ... It was like reading my brother's copies of "Oz" and "Suck and Frendz" and "International Times" - a vague aura of illicit sleaze excitement, but it didn't get under my skin. I finally "heard" Zappa in Italy in 1974 when some Mexican students kept playing his records (The Grand Wazoo and Apostrophe (')). I loved the records because they were so detailed and thought-provoking and silly and complex (the same reason I liked Finnegans Wake). The music refuses to give up its actuality - the logic of its component parts - to any overriding moral or political concept. When I went up to Cambridge to study history, all I had was ten LPs by Mahler and soon a similar number by Zappa. I said to someone who played sax at college (his name was Andrew Blake) "I really like the sound of the tenor sax `blowing its nose' on Weasels Ripped My Flesh. How can I hear more music like that?" He replied: "Archie Shepp, Pharoah Sanders, Albert Ayler". That set me off in another direction." [2]

"The real point of Zappa is, as you rightly say, the music. That is why he was so big in Europe. The lyrics are a total mystery to Polish and Czech fans. I mean, they are to English-speaking listeners too, but US and UK pop consumers expect their own tastes and prejudices to be flattered."[3]

"I'm fascinated by Zappa's attraction towards eastern music. With Zappa, it's not hippie-dippie ersatz bullshit, it's as seriously critical of western (aka bourgeois) values as John Coltrane's world-music project (aka "Free Jazz")."[4]