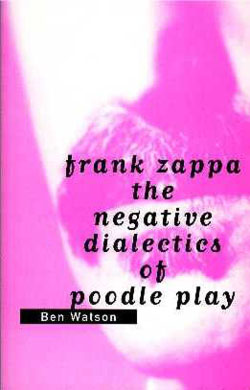 Book cover for "The Negative Dialectics Of Poodle Play"

"This is no less than a frontal assault on authoritarian capitalism from the perspective of Zappology...(It) is stocked with genuine insights and his case for Zappa as a hero of the avant garde - a force to challenge any reigning cultural or political assumptions - is ably made." --Independent on Sunday"

"A book which cites Pamela Des Barres's I'm with the Band as often as it does Adorno is truly unique and...fucking essential." -- Nick Terry The Lizard"

"Like a dementia-seeking missile, it will pursue hard-core Zappaphiles wherever they hide. However, they can console themselves with the thought that, while they may be twisted enough to read a book like this, at least they weren't twisted enough to write it." -- Charles Shaar Murray New Statesman"

"This book is a perfect match for it s subject: overblown, a work of obsession and adoration, but with much criticism of a intelligence rare in rock music writing." -- The Observer"