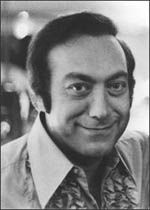 Art Laboe (Salt Lake City, Utah, August 7, 1925) is an American disc jockey, music producer and owner of Original Sound Records, nicknamed "The Ambassador of Rock 'n' Roll". He became a radio D.J. in 1943 and was the first in his profession to take callers' requests and the first on the West Coast airwaves to play rock 'n' roll songs. He also broke new ground by playing both black as well as white musicians. Laboe furthermore gained fame for devoting a whole hour of airtime to Elvis Presley. By 1956 "The Art Laboe Show" on KPOP radio had become the #1 radio program in the Los Angeles area, holding a 33 share, a record which still stands. He popularized the "oldies but goodies" format on radio.

Laboe assembled the first album in American history to feature hits by different artists. This first compilation album, entitled "Oldies But Goodies", was released by Art’s company, Original Sound Records, and stayed on Billboard’s Top 100 LP’s chart for over three years! The series has been expanded to 15 volumes. Laboe is also recognized as the first person to coin the term "Oldies But Goodies".

The City of Los Angeles declared July 17, 1981 "Art Laboe Day" as he received his star on Hollywood Boulevard’s "Walk of Fame".

Zappa recorded the music for the film Run Home Slow in Laboe's Original Sound Records studio, where Paul Buff was sound engineer. Laboe also produced Zappa's Memories Of El Monte, Original Duke Of Prunes and Grunion Run (1963) [1] [2] and encouraged Zappa to produce struggling groups in the Los Angeles / Lancaster area. When Zappa and his girlfriend Lorraine Belcher were jailed in 1965, Zappa used part of his royalties from Laboe to bail Lorraine out and arrange a lawyer.

Zappa name-checked Laboe on the cover of "Freak Out!" (1966) under the heading "These People Have Contributed Materially In Many Ways To Make Our Music What It Is. Please Do Not Hold It Against Them".