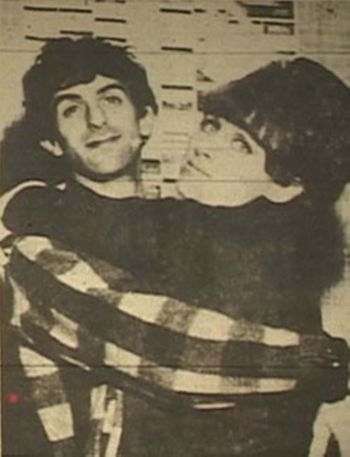 Frank Zappa and Lorraine Belcher in embrace, a few seconds after being reunited after their arrest. This photograph was snapped by a journalist to use as the picture for an article about the police raid on Studio Z. [1]

Lorraine Alice Belcher was a girlfriend of Zappa. They lived together at Studio Z in 1963-1964. She and Zappa recorded a "sex party" tape at the request of a man, Jim Willis, who later turned out to be an undercover police officer. He arrested them on 26 March 1965 for the crime of obscenity. Belcher was 19 years old at the time. In the article "Vice Squad Raids Local Film Studio" (Ontario Daily Report, 1965, Ted Harp), they called her the "buxom red-haired companion" of FZ..." Once Zappa was bailed out of prison, he contacted Art Laboe to give him 1.500 dollar so he could bail out Lorraine as well, and buy an attorney.[2]

She is name-checked - as "Pete", her nickname - on the cover of "Freak Out!" (1966) under the heading "These People Have Contributed Materially In Many Ways To Make Our Music What It Is. Please Do Not Hold It Against Them".

Later in life Belcher became the girlfriend and eventually in 2010 the legally married partner of underground comix artist S. Clay Wilson [3], who is best known as the creator of the comic strip "The Checkered Demon". [4] [5]