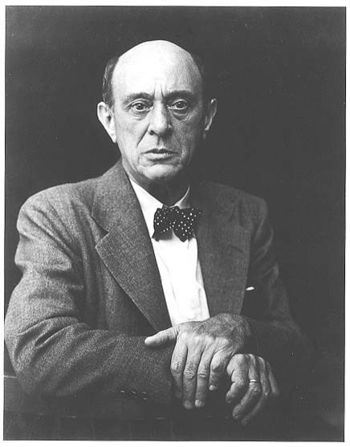 Arnold Franz Walter Schönberg (September 13, 1874, Vienna, Austria – July 13, 1951, Los Angeles, USA) was an Austrian composer and music teacher. He was one of the early experimenters to explore the idea of atonality. Schönberg is especially known for his concept of "12-note" or "serial" music, (a form that Charles Ives had earlier experimented with) and used it in most of his later works. At the end of World War I he taught in Vienna and Berlin, until exiled by the Nazi government in 1933. He settled in California in 1934, having anglicised the spelling of his name, started teaching at UCLA in 1936. and took US nationality in 1941.

He taught John Cage and later described Cage as "not a composer, but an inventor - of genius".

His influential piece Pierrot Lunaire (1912) developed the idea of Sprechgesang, a spoken singing.

Arnold Schönberg is named in the list of influences inside the sleeve of Zappa's debut album "Freak Out!" (1966) under the heading: "These People Have Contributed Materially In Many Ways To Make Our Music What It Is. Please Do Not Hold It Against Them".

"I've heard a lot of that kind of music and there are always things in in that crack me up. There are things in Schoenberg that are equally funny as the words to Wooly Bully, but don't tell him that." - Frank Zappa in Shut Up And Play Your Guitar , Interview by John Dalton, Guitar Player Magazine, May-June 1979.

"I've only heard four or five pieces by Schoenberg that I can enjoy listening to. There's the Septet, and then there's the suite of pieces for orchestra, the one that has "Summer Morning by the Lake" as one of the movements. I think that's really nice. And Begleitungsmusik: is a parody of motion picture music. I like that. But there's very little else by Schoenberg that I appreciate." - Frank Zappa in The Mother Of All Interviews (Part 2), Interview by Don Menn, 1992.

"Things like "The Jazz Discharge Party Hats" or "The Dangerous Kitchen". I would say there's nothing else in rock 'n' roll or in any other medium that resembles those two songs. You mentioned Scott Walker writing rock songs within the tradition of Schoenberg, but I haven't heard those. But "The Jazz Discharge Party Hats" does come close to Schönberg, with its jazz accompaniment to a Sprechgesang (speech-song) text presentation. In it, the melody and the words were improvised and the arrangement built around that in the studio. And in "Dangerous Kitche"n, the lyrics were written but the pitched recitation was something that was done free-form on stage, with the band following." - Frank's Wild Years, '93, By Joe Jackson, RCD, No.12, 1993.