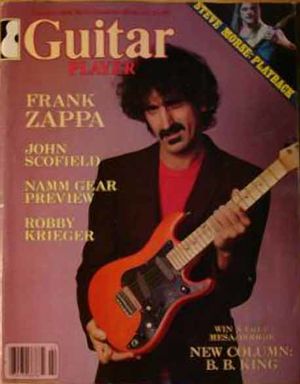 "In Guitar Player's 31-year history (from 1967), virtually every great guitarist in the world has been featured on its cover or in its pages. (...) Guitar Player writes articles from a musician's point of view. Included are inside tips from the masters on how to play better, as well as guitar "tablature" transcriptions. One of the great Guitar Player features in the 1980s were the flexi-disc, thin plastic record "Soundpages" that were placed in the magazine, containing music such as unreleased recordings by Jimi Hendrix and Eric Clapton. Sometimes these were instructional records. Many guitar magazines have come on the scene in the last 10 years, but Guitar Player remains the originator and the innovator for guitar players."