FZ in the style of Matt Groening. (Fan art, not an official Groening drawing)

Matt Groening (Portland, Oregon, February 15, 1954) is an American cartoonist and animator, best known as the creator of "Life in Hell", "The Simpsons" and "Futurama". 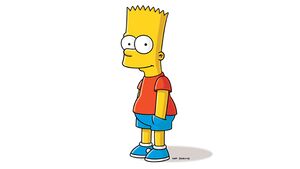 After graduating from Evergreen State College in Olympia, Washington Groening moved to Los Angeles intending to become a writer. He started to send cartoons to his friends expressing his dislike of life in LA and frustration with the progress of his career. He called them "Life In Hell". They soon became popular and Groening found himself making hundreds of copies of each one. He found a job with a weekly paper, the Los Angeles Reader, as an editor/delivery man. The paper started to publish his weekly cartoons. In 1985 producer James L. Brooks, who was an admirer, gave Groening the chance to create an animated TV show about his work, to be broadcast during The Tracey Ullman Show. Moments before the meeting Groening changed his mind and hurriedly sketched a family consisting of one father, one mother, two girls and one boy. To save time he named all of them after his own family, except Bart which was an anagram of the word "brat". Under the name The Simpsons the cartoon segments quickly caught on and received their own spin-off TV series, which became a global phenomenon, popular among general audiences as well as appreciated for its intellectual, satirical edge. During its first seasons the show was animated by Gabor Csupo's studio.

In 1999 Groening created a new animated TV series, Futurama, which is a satire of science fiction. It remained more of a cult show, though has received similar appreciation.

Groening has been a Zappa fan since he was thirteen years old, when he discovered Freak Out! in a store. He considers Zappa his idol. He frequently references Zappa's albums in his comic strip Life in Hell, including this example here: the Zappa Allegiance Pledge.[1] He is an equally big fan of Captain Beefheart.

On April 25, 1986 Groening was a guest in Roger Steffens' radio show "The Sound of the Sixties", where he talked about his love for Zappa and played several of his personal favorite tracks live on the air. Halfway the show Zappa personally called in to have a chat. [2]

By the 1990s Groening regularly visited Zappa and his family. Zappa was a fan of The Simpsons and wanted to be a special guest voice on the show, but became to ill to record his part. In April 1992 Groening and Don Menn interviewed Zappa in The Mother Of All Interviews (Part 2).

Groening also appeared in several 1990s documentaries starring Zappa, including Peefeeyatko, The Revenge Of The Dead Indians, the BBC Television Tribute and The Artist Formerly Known As Captain Beefheart.

He is one of the people receiving thanks for their "very special but no less significant contributions" in The Yellow Shark liner notes. [3] He was also mentioned and thanked in the liner notes of The MOFO Project/Object (2006) album. [4]

Groening wrote "Idol" for the December 20, 1993 issue of The New Yorker as a tribute to Frank. (The issue also included Václav Havel's tribute, "Revolutionary.")

Groening furthermore designed the album cover to Frank Zappa Plays The Music Of Frank Zappa. He contributed an essay to The Hot Rats Book (2019).

"Americans are really suspicious of anything cerebral, and Zappa didn't disguise his intelligence well enough. In addition to being a man of wide-ranging talent, one amazing thing that always struck me about Frank was his melodic dimension ... Frank Zappa was my Elvis. His example encouraged me, made me feel it OK to go my own way, to not do things the way the authorities told me to. One of the things that impressed me was that he didn't allow anything to be beyond him, high culture or low culture. As soon as Bart Simpson is able to shave, he'll have a moustache and goatee just like Frank Zappa."

"American culture has a lot of great moustaches in its history. Mark Twain had a great moustache, Charlie Chaplin, Ben Turpin ... but Zappa, he's got the best moustache in American history. Got the moustache, right, and he's got that little thing on his chin, I think it's called an imperial, that is, like, the coolest thing. That's like one of the great icons of the twentieth century."

"The amazing thing about Freak Out! was that there was nothing quite like it in rock 'n roll at the time. It was really simultaneously crude and ugly, and incredibly sophisticated. The Beatles were funny, but there was nothing with the kind of sneer that you could feel in the music of Frank Zappa."