Bill Gubbins is an American journalist, photographer and writer. In 1969 he met Zappa and in 2019 published photographs he had taken.

In August 1969 the 19 year old Bill Gubbins attended Musicarnival to see Frank Zappa and The Mothers. Seeing Zappa buying a cup of coffee Gubbins nervously asked for an interview. Zappa agreed to the request and invited him to the press session after the show. Whilst most interviewers asked non-music questions about politics, drugs and the like, Gubbins was more interested in asking about the music. This resulted in him giving Zappa a ride back to the band's motel and the chance of another interview the following day. Zappa then invited him to stay at his home when the band had completed their current concerts and Zappa was due to record sessions for Hot Rats.[1]

Arriving at Zappa's home he was greeted by Janet Ferguson in a less than welcoming manner. Gubbins was impressed by Zappa's breadth and depth of knowledge about most things. Asking about the influence electronic music had had on his work Zappa expanded on the history of electronic music, it's leading practitioners and their influences on his work. Citing the then obscure experimental composer Tod Dockstader.[2] 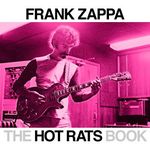 As Gubbins carried a camera with him, although at the time not considering himself a photographer, he took numerous photographs. He shared some photographs from Musicarnival with Zappa but the ones he took of the Hot Rats sessions remained in a deposit box until 2014 when the idea of creating a book with them evolved but no one was interested in publishing it. Gubbins wrote to Joe Travers in 2017 who replied. Gubbins forwarded a rough draft of the book idea that Travers passed on to Ahmet Zappa who's enthusiasm for the project resulted in the eventual publication of The Hot Rats Book[3] in 2019. The book also features essays by Gubbins himself, Ian Underwood, Steve Vai, David Fricke and Matt Groening. Gubbins is also interviewed by Ahmet Zappa who is credited as the co-author.[4]

One of Gubbins photos was used for the poster of the documentary film Zappa (2020).[5] and the soundtrack album.