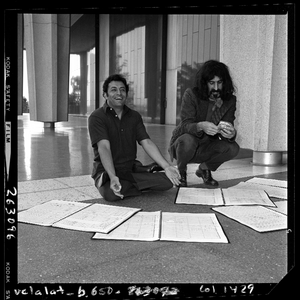 His father Mehli Mehta was a violinist and founding conductor of the Bombay Symphony Orchestra. Zubin initially intended to study medicine, but eventually became a music student in Vienna at the age of 18, under the eminent instructor Hans Swarowsky. In 1958, he made his conducting debut in Vienna. The same year he won the International Conducting Competition in Liverpool and was appointed assistant conductor of the Royal Liverpool Philharmonic Orchestra.

Zubin Mehta is especially famous for his interpretations of large scale neo-romantic symphonic music of composers like Anton Bruckner, Richard Strauss and Gustav Mahler. His conducting is also renowned as being flamboyant and forceful in performance.

FZ about an event that occured during the Contempo '70 Festival:

"Sometime in 1970, I had an offer for a major concert performance of the orchestral music accumulating in my closet. During the M.O.I.'s first five years, I had carried with me, on the road, masses of manuscript paper, and, whenever there was an opportunity, scribbled stuff on it. This material eventually became the score for 200 Motels (based on an estimate of the number of gigs we played in the first five years—forty jobs per year?). The performance was to be held at UCLA's Pauley Pavilion (a basketball arena seating about fourteen thousand people), with Zubin Mehta conducting the Los Angeles Philharmonic Orchestra. A pretty big deal."