Them Or Us (The Book) 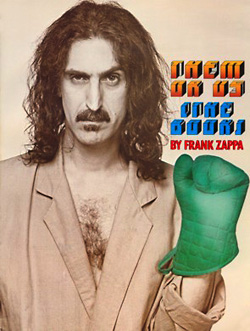 Book cover for "Them Or Us"

Them or Us is the first book written by FZ, initially published by Barfko-Swill (Los Angeles) in 1984 (no ISBN), containing 351 pages.

The book is written in quasi-screenplay style and contains tons of conceptual continuity clues. It is partly narrated by Francesco Zappa.

Among others, Them or Us contains the lyrics to "Flambay", "Spider Of Destiny" and "Time Is Money". These songs were originally issued as instrumentals on "Sleep Dirt", versions with lyrics were supposed to be part of the (unproduced) "Hunchentoot" stage play.

It also contains the complete script of Zappa's musical Thing-Fish. Large parts of the lyrics in the book (and the record) are written in "[...] a pseudo-negrocious dialect, originated by an actor named Tim Moore in the TV version of ‘Amos & Andy’. He was severely punished for it." (Stage character "Frank", page 262.)

From the foreword of Them or Us:

This cheesy little home-made book was prepared for the amusement of people who already enjoy Zappa music. It is not for intellectuals or other dead people. It is designed to answer one of the more troubling questions related to conceptual continuity: 'How do all of these things that don't have anything to do with each other fit together, forming a larger absurdity?' Your enjoyment of the contents could be anhanced by hearing some of the music described in the text. The albums shown on the back cover contain some of these songs. Other songs derive from Joe's Garage and Ship Arriving Too Late To Save A Drowning Witch. This is a story book. It is not a rock & roll biography. This is the only REAL & OFFICIAL FRANK ZAPPA BOOK. All other books attempting to trade on my name are unauthorized and full of misinformation. This book is dedicated to all of the fans who have made the last 20 years of large-scale absurdities possible. This book used to be called Christmas In New Jersey.

The album covers on the back of the book are: Francesco Zappa, Them Or Us, Thing-Fish and The Old Masters.

The front cover is that photo from True Glove with FZ and his oven mitten.